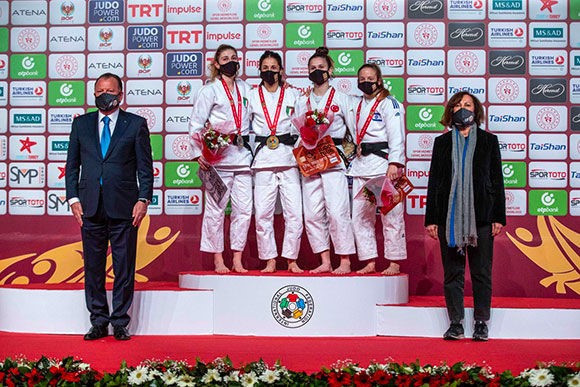 The women’s under-48 kilogram category saw an all Italian final between Francesca Milani and Francesca Giorda, ranked 34th and 37th in the world respectively.

Milani reached her second Grand Slam final is as many weeks and took advantage of penalties suffered by her teammate and opponent to claim the gold medal.

In the bronze medal contests, Gulkader Senturk of Turkey beat Paula Pareto of Argentina, while Shira Rishony of Israel scored a late waza-ari to help her claim victory against Anastasia Pavlenko of Russia.

A close contest between two judokas who knew each other well ensued, and it was Deguchi who claimed gold capitalising on penalties from her opponent.

In the men’s under-60kg category, gold went to Belgium’s Jorre Verstraeten who overcame an injury hindered Walide Khyar of France.

Verstraeten claimed his first gold at a Grand Slam event courtesy of a o-uchi-gari which he turned into an acrobatic uchi-mata for an ippon.

The bronze medal contests saw Yang Yung-Wei of Taiwan beat Albert Ozugov of Russia thanks to a waza-ari and a hold down, while Romaric Wend-Yam Bouda of France won his first Grand Slam medal by beating Salih Yildiz of Turkey courtesy of an opportunist counterattacking o-uchi-gari.

In the women’s under-52kg category, gold went to Diyora Keldiyorova of Uzbekistan who took less than 30 seconds to secure victory, thanks to a sode-tsuri-komi-goshi which trapped her opponent Estrella Lopez Sheriff of Spain.

Bronze medals went to Gili Cohen of Israel who beat Agata Perenc of Poland, and Aleksandra Kaleta of Poland who scored twice early on to defeat Zeliha Cinci of Turkey.

Abe was made to work for his gold medal, which he finally secured two minutes into golden score courtesy of a ko-uchi-gari.

Bronze medals went to 2019 European senior champion Orkhan Safarov of Azerbaijan, who beat under-23 European champion from the same year Murad Chopanov of Russia courtesy of a powerful ura-nage for a waza-ari, and Nijat Shikhalizada of Azerbaijan, who scored an ashi-waza for an ippon against Kilian Le Blouch of France.