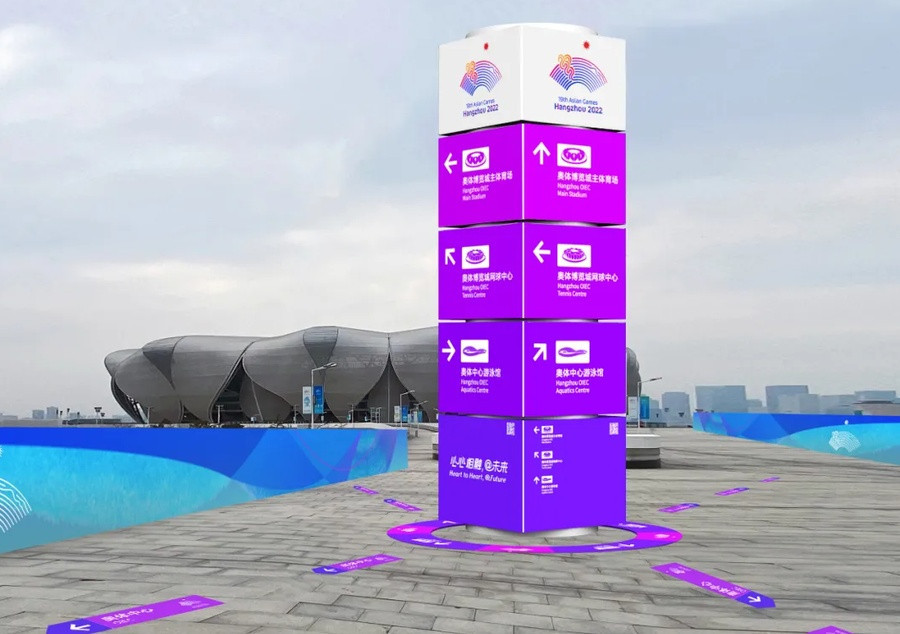 Signage for the Hangzhou 2022 Asian Games has been praised by Olympic Council of Asia (OCA) director general Husain Al-Musallam.

The purple design, said to be inspired by jade relics from Neolithic times found in Zhejiang province and the Qiantang River's tidal bore, "will contribute to the festive atmosphere and vibrant appeal of our next Asian Games", Al-Musallam believes.

"Signage of the Games in any sporting event plays a significant part in the promotion of the Games as well as leaving a lasting legacy of the Games," he said.

"The OCA is very happy with the attractive look and distinctive signage of the 19th Asian Games Hangzhou 2022."

Zhou Feng, an associate professor in visual communication at the China Academy of Art's School of Design, designed the signage.

A ceremony was held at the designer's studio in Hangzhou, the city set to stage the Asian Games in fewer than 18 months.

The markings are set to be used at Games venues to direct traffic flow and the help spectators, athletes and officials find where they need to be.

Organisers say signage will be arranged in layers to make it easier to read, and it is further claimed that soft edges on pictograms were used to reflect the tranquility of Hangzhou - a city of more than 10 million people.

The Games are scheduled to begin on September 10 2022.

The 19th edition of the Asian Games, it will mark the third time China plays host to the event after Beijing 1990 and Guangzhou 2010.

China is set to host a series of flagship multi-sport events at a time when it is facing increasing international pressure over its persecution of Uyghur Muslims - something human rights groups say amount to a genocide, but Beijing claims sending thousands to "re-education camps" is necessary for internal security.

Chengdu is due to host the Summer World University Games this year, the next Asian Beach Games are scheduled for the Chinese island city of Sanya but a date has not yet been announced following coronavirus-related postponements, and Beijing is due to host the Winter Olympics and Paralympics in 2022.