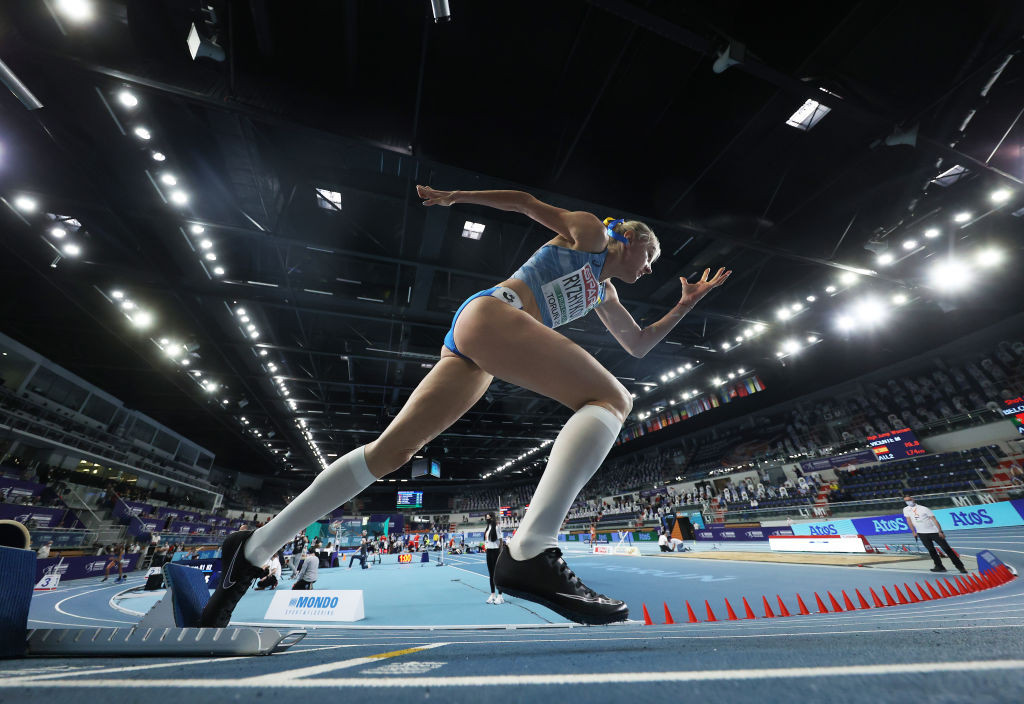 Two staff members of the French team have also had to quarantine in Poland following positive COVID-19 tests, and Britain’s 46-strong squad is having to isolate at home for 10 days following a positive test returned by a "member of the travelling party", as is the Irish squad.

Two of the Ukrainian women who ran in the 4x400 metres relay, European 400m hurdles silver medallist Anna Ryzhykova and Katerina Klymyuk, and reserve relay member Alina Lohvynenko are understood to have tested positive on Sunday evening and again the next morning.

Sprinter Viktoriya Ratnikova, who reached the women’s 60m semi-finals, is reported to have tested negative but has had to stay as she was the room-mate of one of the athletes who tested positive.

The women’s relay team finished fifth in the final in a national record of 3min 30.38sec, while Ryzhykova recorded a personal best of 52.11sec in the individual 400m, missing out on the final by one place.

Two members of the French squad also remain in quarantine in Poland after giving positive COVID-19 tests and Britain’s squad the Championships - which took place without spectators - has been forced to self-isolate after a member of the team’s support staff tested positive for coronavirus.

The two French team staff members were sharing a hotel room and were placed in quarantine on Friday (March 5) after one showed symptoms of coronavirus, L’Equipe reports.

Both then tested negative, but as they prepared to return with the rest of the team new COVID-19 tests on Monday (March 8) came up positive.

The officials were taken in the evening by ambulance to a medical centre around 30 kilometres south of Torun where they are now in quarantine.

Following the intervention of the French Athletics Federation it has been arranged for the two officials to take new tests and to return swiftly if they show up as negative.

Britain’s squad, which returned with 12 medals and finished third in the table behind The Netherlands and Portugal, must now complete 10 days in isolation in line with Government guidance.

British Athletics said in a statement: "A member of the GB & NI team travelling party returning from Torun provided a positive lateral flow test on the evening of 9 March.

"This has been followed up this morning with a PCR test.

"As a result, all members of the travelling party will now need to self-isolate for a period of 10 days from Monday 8 March (ends Thursday 18 March) in line with government guidance."

Irish athletes are also having to self-isolate after a positive COVID-19 test among their party.

An Athletics Ireland release said: "A member of the Irish athletics team returning from the European Indoor Championships in Torun, Poland has provided a positive PCR test on the morning of March 11.

"As a result all team members have been personally contacted and close contacts of the positive case in the travelling party are now self-isolating for a period of 10 days from Monday March 8 in line with government guidance.

"Athletics Ireland is liaising with all relevant authorities to manage this matter and continues to follow all protocols as agreed with the Sport Ireland Expert Advisory Group and the HSE (Health Service Executive)."

A number of positive tests affected the Championships, despite strict protocols which required all competing athletes to test negative upon arriving in Poland and again in Torun, as well as submit to further tests every five days.

Poland’s men’s 4x400m squad had to withdraw following a positive outbreak, and home sprinter Ewa Swoboda also tested positive ahead of the event, meaning she was unable to defend the women’s 60m title.

I hope this never happens to anyone again and there can be a solution for such situations in the future.
Also, if anyone has an idea what might cause a false positive... I’d be happy to hear. Bad luck is not really an answer that suits professional sports.... @vanranstmarc pic.twitter.com/RU42uCeKUH

Belgian sprinter Eline Berings criticised the testing procedure after being forced to withdraw from the semi-finals of the 60m, claiming it was due to a false positive.

European Athletics said Berings was tested as part of the mandatory sanitary and medical protocol agreed by the Local Organising Committee and Polish Government.

Athletes needed to test negative to enter Poland and again upon arrival in Torun before undergoing further tests every five days.

"Eline took a RT-PCR test on Saturday as part of the standard procedure," a statement from European Athletics read.

"This test delivered a positive result.

"According to Polish regulations she then went into isolation.

"However, also as per Polish regulations, a person who tests positive must then show two negative PCR tests with an interval of 24 hours between the first and second test.

"In Eline’s case the time period between these two additional PCR tests was actually brought forward specifically on EA’s request.

"This in order to allow her to travel back with the rest of the team should both tests deliver a negative results, which proved to be the case."

The European Athletics Indoor Championships were the sport's first multi-discipline event since the coronavirus pandemic began.