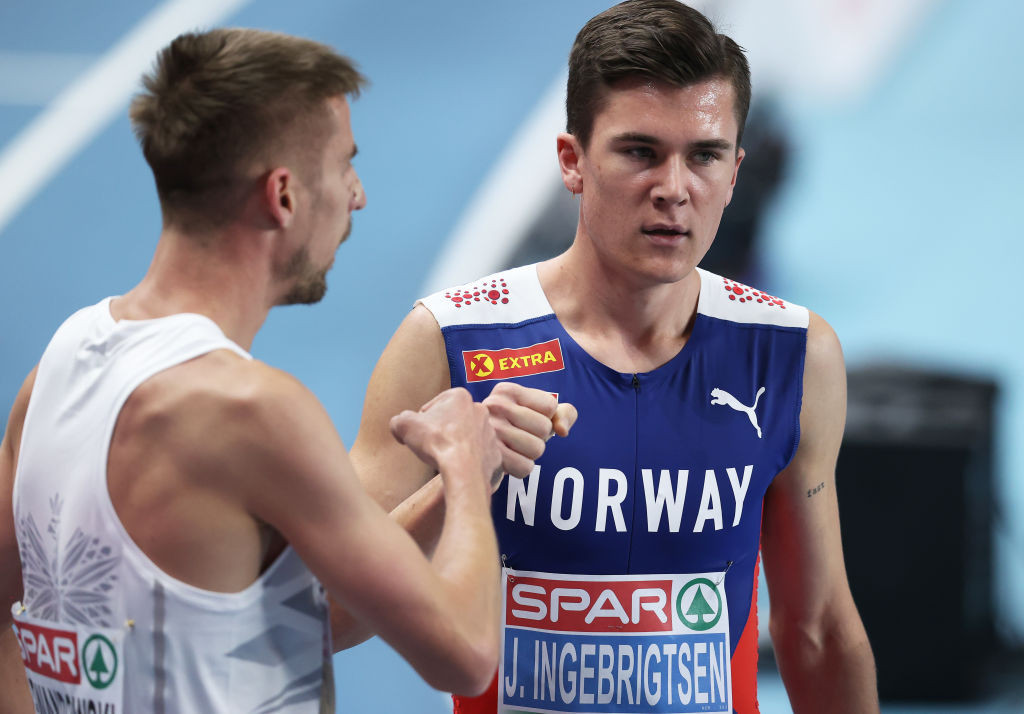 On a night when Olympic heptathlon champion Nafissatou Thiam won the European Athletics indoor pentathlon title in Torun, Jakob Ingebrigtsen had gold taken out of his hands after being disqualified following the 1500 metres final, only to have the title returned on appeal.

Ingebrigtsen seemed to have earned the 1500 metres victory that eluded him two years ago in Glasgow - but Poland’s 33-year-old home favourite Marcin Lewandowski was soon able to claim the title for a second successive time after the 20-year-old Norwegian was disqualified for stepping onto the infield.

Norwegian officials swiftly appealed against the disqualification, and soon after midnight local time the result once again showed Ingebrigtsen as the winner in 3min 37.56sec, with Lewandowski second in 3:38.06 and Spain's Jesus Gomez third in 3:38.47.

In an official statement, the Jury of Appeal ruled: "Ingebrigtsen was pushed by another athlete and therefore stepped inside the curb.

"The athlete did not gain any advantage and did not affect the race and the outcome of it."

As debate had gone on late into the night, Ingebrigtsen said that if the decision stood he would probably go straight home rather than defending his 3000m title.

The controversial ruling followed an incident early on in a final crowded with 13 runners, with Ingebrigtsen appearing to infringe the rules momentarily as home runner Michal Rozmys bustled through on his outside.

The field soon elongated as the defending champion, and then Ingebrigtsen, who lowered the European indoor record to 3min 31.80sec in Lievin last month, putting him fifth on the all-time list, took the lead.

Having been outsprinted by his Polish rival in the Glasgow 1500m, Ingebrigtsen was not dallying and while Lewandowski kept in contact right to the end it was the Norwegian who crossed first.

Then things got complicated.

As Ingebrigtsen was turning his attention to the defence of his title in the 3000 metres, where he is due once again to face Lewandowski, the official announcement he least wanted to hear arrived.

Reacting to his apparent disqualification, Ingebrigtsen told European Athletics: "The rules are on my side, there is a paragraph saying if you're pushed to the inside of the curb and it's not your fault, it's OK.

"I don't feel I've done anything wrong, there were just too many runners in the race.

"We talked with Michal Rozmys after the race - none of us was trying to shove the other one, it just happened when too many other guys were coming from the outside.

"I simply wanted to win the race.

"At the end I kept a safe distance to Marcin so that I could react if he tried to come back.

"But I knew a disqualification was coming.

"The decision is still under appeal.

"If it's upheld and I lose the gold, I guess I'll just go home.

"I'm not sure I'm going to race tomorrow in this situation, because the 1500 was my main goal."

Lewandowski commented: "I was second on finish but finally have a gold after Ingebrigtsen's disqualification.

"It is sport and it could happened with anybody.

"I experienced it during World Championships, so I know what he feels now.

"During the race he was definitely better.

"He knew I prefer slower tempo, so decided to lead race very fast.

"I tried to catch him and didn't want to battle only for silver.

"In one moment I was near by, but his finish was incredible.

"It wouldn't be a shame to lose to a guy who almost broke a world record, but finally today I am with gold.”

"I am really happy with the national record because I never prepare specifically for the indoor season."

Thiam, who had to miss her national indoor championships last month after testing positive for COVID-19, broke Tia Hellebaut’s national record of 4877 points, totalling 4904 after coming home in the concluding 800 metres in an indoor personal best of 2:18.80.

It was a huge marker for Tokyo 2020, fully validating the 26-year-old Belgian’s decision to compete on the boards with Britain’s Katarina Johnson-Thompson, who beat her to the world title in 2019, taking a precautionary time out after a minor injury.

Thiam, who won this title in 2017 after taking silver in 2015, had resumed competition in the evening session after establishing the lead with with 3024 points after the 60m hurdles, the high jump, which she won with 1.89 metres, and the shot put, which she won with 15.16m.

Given that the Olympic and European champion holds both the outdoor and indoor Belgian records in this event - at 6.86 and 6.79 metres respectively - she could afford to look forward to the fourth element of this competition with confidence.

And after a first attempt failure allowed Vidts, who registered a personal best of 6.47m, to take an "as they stand" lead, normal service was swiftly resumed. The Olympic champion cleared 6.60m on her second attempt to earn 1040 points that re-established her in the lead on 4064, 200 points clear.

"I am really happy to be already that good," said Thiam. "I miss some technical work and regularity. Especially in the high jump. But 1.89 is pretty good.

"The other four events went really, really well. I surprised myself in the shot put and the long jump.

"Last year I trained a lot and worked really hard. That is what made the difference today. I am really happy with the national record because I never prepare specifically for the indoor season."

There was plenty more drama in the Torun Arena during the first session of finals.

Greece’s Miltiadis Tentoglu, his left knee strapped, appeared to have completed the defence of his long jump title with his first effort - 8.35m, the best seen in the world this year.

Sweden’s Thobias Montler responded with a national record of 8.31m that kept the competition fully alive.

Then Finland’s Kristian Pulli stepped up to the mark with a national record of 8.24m, and that was how it stayed.

She clocked 8:46.43sec after withstanding pressure from team-mate Verity Ockenden, who had to settle for bronze in 8:46.60 as France’s Alice Finot came through in the final strides to take silver in 8:46.54.

Home favourite Michal Haratyk, the European shot put champion, was not quite able to withstand the competitiveness of the Czech Republic’s Tomas Stanek, whose fifth round national record of 21.62m, lustily celebrated, shot him into the lead.

Haratyk responded well with his fifth-round throw to move back up to second place with 21.47m but that was his high-water mark.

Portugal’s Auriol Dongmo secured the first gold of these Championships as an effort of 19.34m won her the shot put ahead of Sweden’s Fanny Roos, who managed a national record of 19.29m.