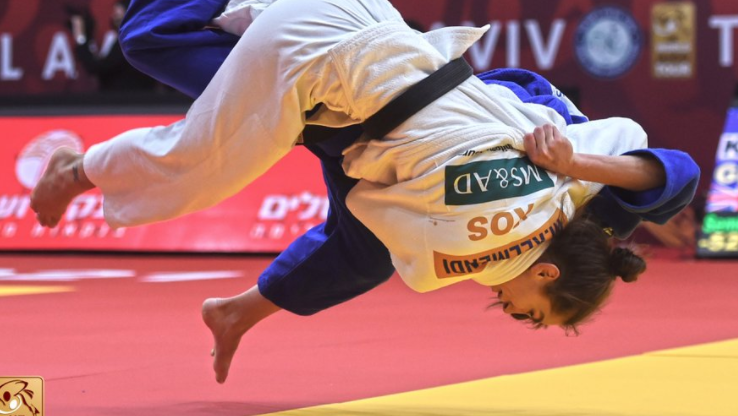 Tel Aviv’s hosting of the first International Judo Federation Grand Slam to be staged in Israel got off to a riveting start as Olympic champion Majlinda Kelmendi and double world champion Daria Bilodid suffered shock defeats, and Iran described the participation of its former judoka Saeid Mollaei as "a stain of shame".

Kosovan Olympic champion Kelmendi was beaten in the semi-final of the women’s under-52 kilograms class by Britain’s Chelsie Giles, who went on to defeat home favourite Gili Cohen in the final.

It was an extraordinary effort for the 24-year-old Giles, whose previous best result at a Grand Slam was bronze in 2019, the same year she won European Games bronze.

The Briton put paid to Kelmendi’s ambitions by throwing her with an uchi-mata.

And in the final, always dominant in her groundwork, Giles held her opponent in sangaku gatame for the mandatory 20 seconds to win by ippon score.

"I am so happy with my performance, to beat the Olympic champion and win my first Grand Slam gold medal is fantastic."

There was also a big turn-up in the women’s under-48kg category, where Ukraine's Bilodid, looking in just the form to earn a fifth Grand Slam win, was upset in the final by France’s Shirine Boukli.

Timna Nelson-Levy carried the home banner into the final of the women’s under-57kg, where she required just 18 seconds to dispose of the challenge of France’s Sarah-Léonie Cysique.

Bronze medals were claimed by Georgia’s Eteri Liparteliani and Hedvig Karakas of Hungary.

In the men’s under-60kg, Davud Mammadsoy of Azerbaijan defeated Georgia’s Temur Nozadze to earn the title.

The day had begun with a stinging response from Iran to the presence in Israel of Mollaei.

Arash Miresmaeili, President of the Iranian Judo Federation, sent the following message to his estranged judoka: "This is not an honour but a stain of shame on your forehead that will stay with you forever, because you have turned your back on the ideals of the system, on your homeland, and are proud of it.”

The Islamic Republic does not recognise Israel's right to exist and its athletes are ordered to avoid encountering Israeli opposition in international competitions.

Israel’s formidable Timna Nelson Levy has been in a class of her own today! She confirmed her Gold medal by defeating the impressive Cysique of France in just 18 seconds in the Final! #JudoTelAviv #Judo #Sport #Olympics #TelAviv
©️IJF Media Team - Ben Urban pic.twitter.com/jOvGekcqNb

Mollaei refused to return to Iran after claiming he had been ordered to throw a match at the 2019 World Championships - where he was defending his under-81kg title - to avoid facing the Israeli who went on to win the title, Sagi Muki.

Having moved to Germany, Mollaei, who has claimed threats have been made against his family back in Iran, has been cleared to compete for Mongolia.

Meanwhile the International Judo Federation has suspended the Iranian Judo Federation, which is awaiting the result of its appeal against the ruling to the Court of Arbitration for Sport.

After Mollaei arrived in Israel on Sunday, Muki posted an image on social media of the two of them with their arms around each other, with the heading: "Welcome brother".