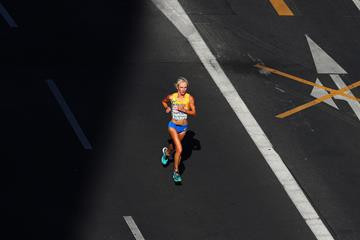 Sbaai, who also claimed gold at the 2019 Sofia Marathon, triumphed again in this year's men's race on October 10.

He set a course record of 2 hours 13mins 3secs in the Bulgarian capital.

The Moroccan then went on to win the Varna Marathon in Bulgaria on November 7, although his result was uncertified due to the race lacking an international measurement certificate.

Khapilina also managed a course record in the women's race at the Sofia Marathon, winning in 2:27:57.

Both athletes tested positive for erythropoietin (EPO) in samples provided as part of an in-competition test.

"The AIU has provisionally suspended Viktoriia Khapilina and Youssef Sbaai for the presence of recombinant EPO, in violation of World Athletics Anti-Doping rules following in-competition tests," the AIU said.

This year's competition still took place despite the COVID-19 pandemic, which has forced the cancellation of a number of other marathons around the world.

Organisers said they would wait for the final decision from World Athletics before redistributing the winners' medals.

"The news is a clear message to all those who seek to compete using fraudulent and dishonest means," a statement said.

"Together with our partners, sponsors and municipal authorities, we remain firmly committed to fair play and doping free sport.

"The marathon organisers will await the final decision of World Athletics before reordering the rankings and the winners' prizes."

If the suspensions are upheld, Reduan Nouini will be given the men's title after finishing just behind his compatriot Sbaai.

Jebet Naom of Kenya will become the women's winner after recording a time of 2:28:38.