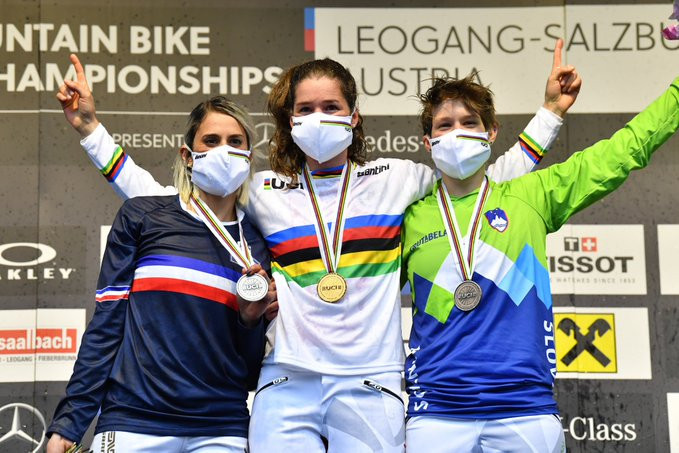 The 30-year-old Swiss rider completed the course in 5min 08.426sec in difficult conditions in Leogang-Saalfeldenon.

Balanche's time was more than three seconds faster than Nicole, who fell short in her bid to retain her world title and was forced to settle for the silver medal.

Monika Hrastnik of Slovakia did enough for bronze after finishing 16.966 adrift of Balanche in top spot.

In the men's downhill race, Britain's Reece Wilson clinched gold after recording an impressive time of 3:51.243.

Wilson sealed the title ahead of Austria's David Trummer, who was 3.197 slower than Wilson.

Rémi Thirion of France was the recipient of the bronze medal as he was over two seconds further behind in third place.

"After last year, I believed I could beat these guys," said Wilson.

"But as they were all coming down [the course], and I was actually beating them, I couldn't believe it.

Ireland's Oisin O'Callaghan took the men's junior downhill honours in 4:02.142, beating Britain's Daniel Slack, who was 2.141 behind in second.

The women's junior downhill crown was sealed by Lauryne Chappaz of France, who blew the rest of the field out of the water by clocking 5:41.502.