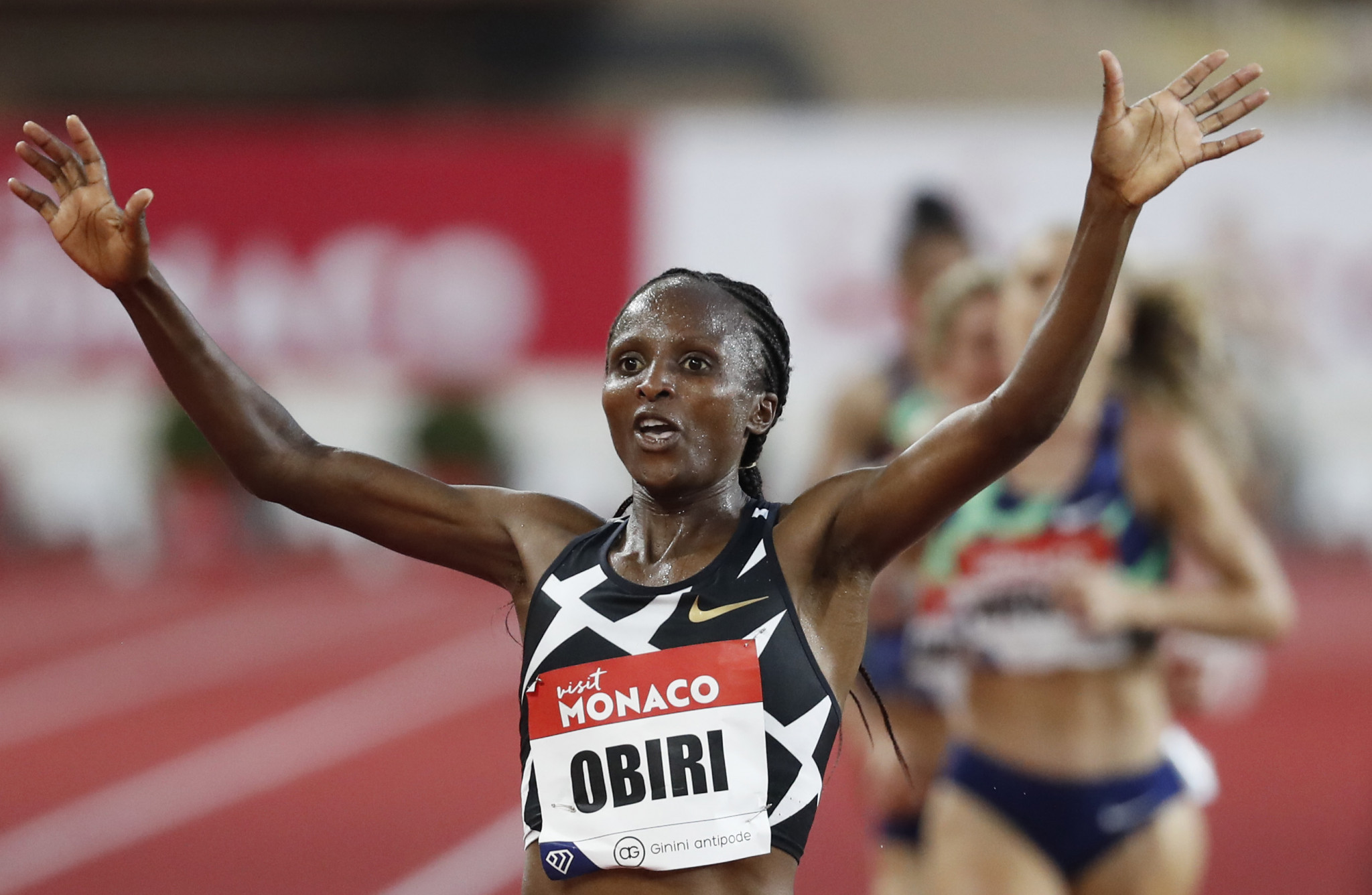 Kenya’s Hellen Obiri and Faith Kipyegon registered 2020 world-best times over the relatively unfamiliar distances of 3,000 and 800 metres respectively at tonight’s final Diamond League meeting of the season in Doha.

The action took place across town from the air-conditioned Khalifa International Stadium which hosted last year’s World Championships, returning to the original venue of the Qatar Sports Club - empty of spectators - which meant that athletes were faced with performing in temperatures around 38 degrees Celsius.

The final action of the evening saw Armand Duplantis of Sweden maintain his unbeaten run in a season that has brought him a pole vault world record of 6.18 metres and a world's best outdoor vault of 6.15m.

Obiri, who had spoken on the day before the meeting of her desire to do "something special", controlled the race from the front.

As the field reached the bell Obiri was briefly headed by compatriot Beatrice Chepkoech, the world champion and record holder in the 3,000 metres steeplechase, only to re-assert herself at the start of the back straight before striding clear with arms pumping in characteristic style.

"This was only my second 800m race after about three years break from it. I wasn't really expecting to win, so I'm very surprised!"

Faith #Kipyegon after running a PB and the fastest time in the world this year. #DohaDL pic.twitter.com/fWtr0Lykp7

Kipyegon had earlier offered a tantalising glimpse of her quality over 800m as she set the world’s fastest time this season, finishing ahead of Spain’s Esther Guerrero, who was clearly thrilled at running a personal best of 1:59.22, with Adelle Tracey of Britain third in 1:59.87.

On a night when several leading athletes tried out at unfamiliar distances, the switch to two-lap running for Kipyegon’s compatriot Timothy Cheruiyot, the world 1500 metres champion, did not pay off as he trailed home eighth in 1:46.78 in a race won in 1:44.16 by Kenya’s world bronze medallist Ferguson Cheruiyot Rotich.

Rotich was chased home by Britain’s Elliot Giles, who was rewarded with a personal best of 1:44.56.

Not quite!#Duplantis will have to make do with 5.82m as his winning height.

A relief, at least, to know that the genius is human after all. #DohaDL pic.twitter.com/IfCCtNPNOJ

Jamaica’s Rio 2016 100 and 200 metres champion Elaine Thompson-Herah showed more convincing evidence of her return to top form this season as she won over the shorter distance in 10.87sec, just 0.02 off the 2020 season’s best she ran at last week’s meeting in Rome.

Multiple world medallist Marie-Josee Ta Lou of the Ivory Coast was second in 11.21.

Stewart McSweyn ran from gun to tape in search of his second Australian record in the space of nine days, and was duly rewarded as he won a talent-stacked 1500 metres from the front in 3min 30.51sec.

McSweyn, who broke the national 3,000m record at the last Diamond League meeting in the Italian capital, was the only runner to go with the two pacemakers, and by the time he took over the lead shortly after the bell he was 30m clear of a field that included Kenya’s world 3,000m steeplechase champion Conseslus Kipruto and the world 5,000m silver medallist, Selemon Barega of Ethiopia.

The 25-year-old from Tasmania - who is also the Australian 10,000m record holder - pushed on over the final 300m despite showing obvious signs of strain, thus taking the record from Ryan Gregson, back in 12th place, who held the mark at 3:31.06.

As with previous Diamond League meetings in these times of coronavirus, all athletes had been tested at least once in recent days and were staying in "bio-secure" conditions in the meeting hotel.

For Kipruto, the 1500m was a long-delayed debut in a season where his planned arrival in international competition at last month's opening Diamond League meeting of the season in Monaco was negated when he tested positive for COVID-19 shortly before being due to leave his native Kenya.

But it proved to be a race too far as he failed to finish.

Payton Chadwick got her evening off to a winning start as she produced a season’s best time of 12.78sec in the 100m hurdles to finish ahead of American compatriot Taliyah Brooks, who ran a personal best of 12.86.

While Chadwick looked ahead to 100m flat, where she finished seventh in 11.51, Brooks had to switch swiftly to the infield to take her place in the long jump competition that was already underway.

As in the Stockholm meeting, this event utilised the "final three" format whereby the three farthest jumpers in the first five rounds qualified for a one-shot jump-off to decide the winner.

As she had in Stockholm, Ukraine’s Maryna Bekh-Romanchuk managed the format best, producing her best effort of the night, 6.91 metres, to take the victory.

Nigeria’s Ese Brume, who had led after five rounds with 6.71m, was second after producing 6.68m with her final effort, with third place going to Sweden’s Khaddi Sagnia despite her earlier effort of 6.85m.

One athlete who appeared to have been adversely affected by the conditions was Kahmari Montgomery of the US, who, after winning the men’s 400 metres in 45.55sec after a fine demonstration of smooth bend-running, remained on his back for some minutes receiving attention and hydration.

American Freddie Crittenden’s injury in warm-up opened things up in the men's 110m hurdles, and the event became further diminished as first Paolo Dal Molin of Italy and then favourite Wilhem Belocian of France false-started.

Aaron Mallet of the US was soon whooping with joy - easy enough to hear - after winning in a personal best of 13.15sec.

Arthur Cissé set an Ivory Coast record of 20.23sec to win the 200m from Jamaica’s Julian Forte, who clocked a season’s best of 20.39, with France’s former European champion, Christophe Lemaitre, third in 20.68.