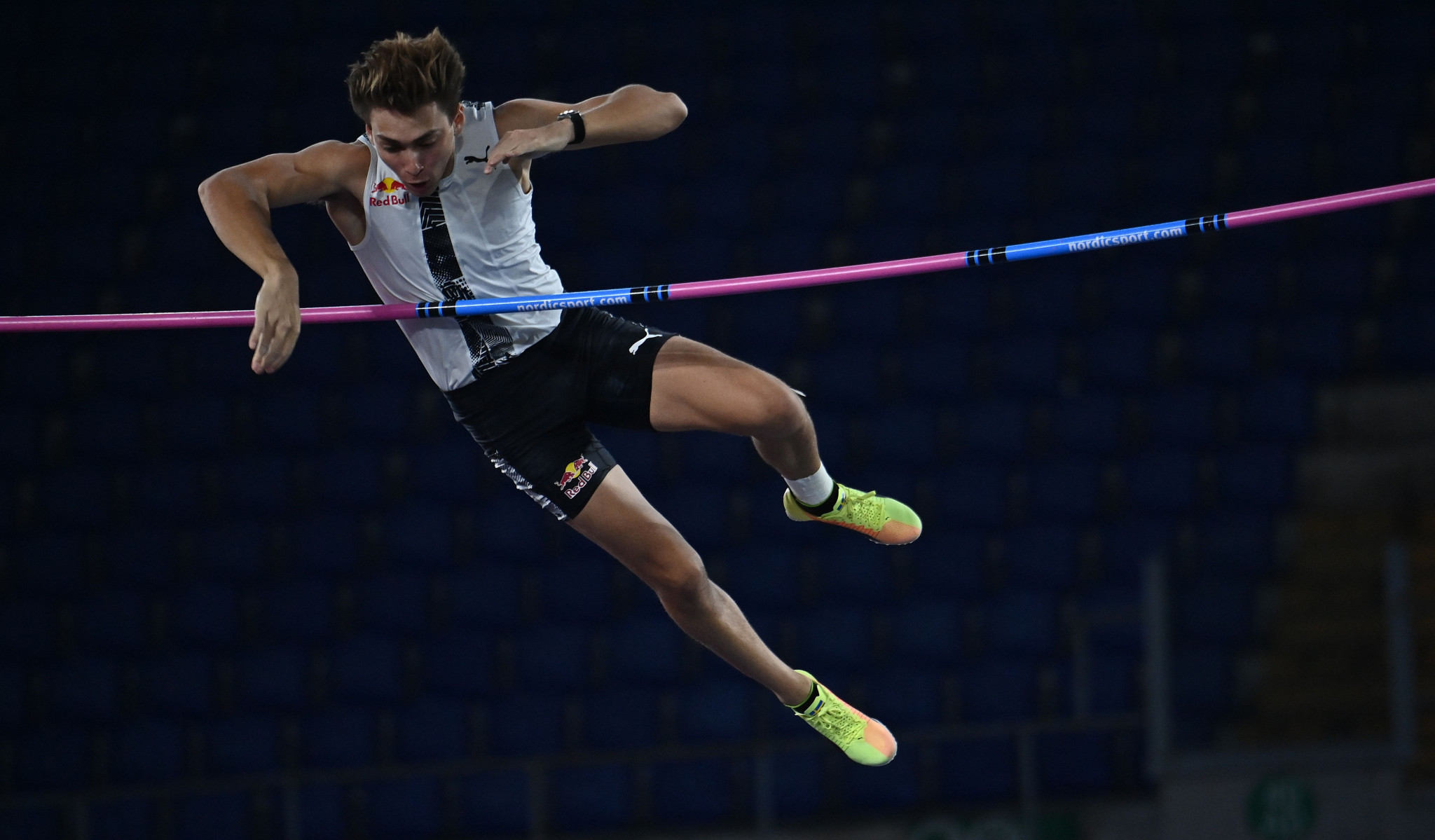 Armand Duplantis, who began this troubled season with two pole vault world records, will end it with the additional distinction of producing a world-best clearance outdoors as he achieved 6.15 metres at tonight’s penultimate Diamond League meeting in Rome.

The 20-year-old United States-based Swede, who raised the world pole vault record to 6.17 and then 6.18m earlier this year at indoor meetings in Toruń and Glasgow, had previously had 13 attempts, spanning five meetings, to better the 1994 mark of 6.14m set outdoors by former world record holder Sergey Bubka of Ukraine.

His first attempt on a warm and still night in an empty Stadio Olimpico saw him arch well clear of the bar, only to clip it with his chest on the way down.

His second attempt adjusted that process and he slid over the bar and into another part of athletics history with total assurance.

Clearing 5.85m at the second attempt had allowed Duplantis to see off a field that included France’s former world record holder Renaud Lavillenie, who had a best of 5.70m, with his closest challengers being Ben Broeders - second with a Belgian record of 5.80m - and Ernest Obiena of The Philippines, third on the same mark.

Asked how it felt to finally clear 2.15m outdoors, Deplantis replied: "It was mostly relief!

"I just wanted to get both the indoor and outdoor marks, and now I’ve done it.

Earlier Karsten Warholm, tantalisingly close to the world 400 metres hurdles record this season, had produced the third-fastest run of his career as he clocked 47.07sec with a characteristically bold and aggressive performance.

Norway’s 24-year-old double world champion has now run four of his five best times in the awkward circumstances of this season, with its empty stadiums and disrupted training and competition, and at the Diamond League meeting in Stockholm last month he ran 46.87 to come agonisingly close to the world record of 46.78 set by Kevin Young of the US in winning the Barcelona 1992 Olympic title.

On that occasion Young smashed the last hurdle, and Warholm also whacked the final barrier in Stockholm.

In the Stadio Olimpico he cleared it, but a momentary stutter in his approach will have cost him valuable fractions of a second.

Warholm, who also surpassed the meeting record of 47.48 set by his Qatari rival Abderrahman Samba, has nevertheless established an awesomely high plateau from which to strike, eventually, for the peak he seeks.

Asked if he was satisfied, Warholm responded: "Of course - this is my third best time ever.

"I ran really low 47ers on a regular basis this year and I am very happy.

"This season has been a good experience for me.

"It is good fun for me coming here to Rome with the warm weather and no winds - unlike back home in Norway where it is cold now and rainy.

"I am quite used to talk about it and I love it because it shows that I am in the right pace, that I am close."

Warholm finished way clear, as usual, but still dragged his two closest challengers into becoming the second and third men to beat 49 seconds this season, with France’s Ludvy Vaillant second in 48.69 and Rasmus Mägi of Estonia third in 48.72.

Jacob Kiplimo won a stupendous struggle against fellow 19-year-old Jakob Ingebrigtsen to win the sole distance event on the programme, the men’s 3,000m, in a 2020 world-leading time of 7min 26.64sec.

The young Ugandan athlete, who won silver in the World Cross Country Championships last year and won a rousing 5,000m in Ostrava last week in 12:48.63, also claimed a national record, a Diamond League record and eighth place in the all-time list.

Ingebrigtsen, who had taken the lead at the bell and maintained it until the final 20 metres, was rewarded with a Norwegian record of 7:27.05, the second-fastest time ever set by a European.

The men’s 400m was to have featured the Olympic champion and world record holder Wayde van Niekerk, whose recovery from an anterior cruciate ligament injury at the end of 2017 continued with a win at the meeting in Bellinzona in Switzerland in 45.58 on Tuesday (September 15).

Unfortunately Van Niekerk had to return to South Africa, reportedly for family reasons, and in his absence home athlete Edoardo Scotti won in a personal best of 45.21.

Twenty-two year old Lieke Klaver of The Netherlands, who began the season as a 53-second 400m runner, won the women's race in a personal best of 50.98 against a field including Poland’s European champion Justyna Święty-Ersetic, who was third in 51.94.

A clearance of 1.98 metres was enough to win Ukraine’s Yuliya Levchenko the women’s high jump, with her compatriot Yaroslava Mahuchikh, the only other woman to have jumped 2.00m this season, second on 1.95m.

The men’s high jump was won by Andriy Protsenko of Ukraine after a clearance of 2.30m, with home jumper Gianmarco Tamberi second on 2.27m.

The last Diamond League meeting of the season is due to take place in Doha on September 25.