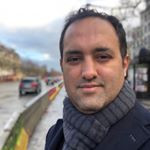 His appointment was confirmed by the National Olympic Committee of the Islamic Republic of Iran, where Fakhri holds the position of director of the national teams monitoring centre.

Fakhri is the head coach of Iran's fencing squad and secretary general of the country's fencing federation.

The Asian Beach Games was set to be held in November but is now due to take place from April 2 to 10 2021 in the Chinese city due to the COVID-19 pandemic.

More than 2,000 athletes from more than 40 countries are expected to compete across 19 sports next year.

Since the event first took place in Bali in Indonesia 12 years ago, Iran has racked up 56 medals - the sixth highest in the medal rankings - with 31 of those coming in Thailand 2014.