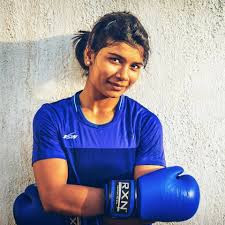 Indian boxer Nikhat Zareen is aiming to compete at the Asian and Commonwealth Games in 2022 after failing to earn a place at next year's Olympics in Tokyo.

"For now, I have my goal set for the Commonwealth Games and Asian Games being held in the year 2022," she said, as reported by IANS.

"I am already preparing myself to deliver a phenomenal performance in these tournaments.

"Currently with no tournaments lined up for the year, I am channeling all my efforts towards improving my fitness and agility for all the tournaments that will be held in the year 2021.

"These tournaments will pave the way and hone my skills to better perform at the Commonwealth Games and Asian Games, post which I will be dedicating my entire focus on the Olympics."

The 2022 Commonwealth Games are set to take place in Birmingham from July 28 to August 8 in 2022, followed by the Asian Games in Hangzhou from September 10 to 25.

Zareen failed to qualify for Tokyo 2020 in a controversial manner, having demanded a match against the six-time world champion and London 2012 bronze medallist Mary Kom to contest a place at the Asia and Oceania qualifiers.

The 36-year-old Kom had been granted an automatic place at the qualification event by the Boxing Federation of India (BFI), a decision which appeared to go against its own selection criteria.

The BFI said it would only hand direct places at the qualifier to Indian boxers who won a gold or silver medal at last year's World Championships.

Kom could only manage bronze at the Women's World Boxing Championships in Ulan-Ude in Russia, prompting Zareen to write to India's Sports Minister Kiren Rijiju to complain about the London 2012 bronze medallist being given an automatic place.

The pair eventually took each other on in a tense trial match in December, with Kom comfortably defeating Zareen 9-1.

Zareen revealed her disappointment at losing the match, but said she quickly moved on.

"It is every athlete's dream to represent their country in the Olympics," the 24-year-old said.

"Thus, when I did not qualify for the Tokyo Olympics, I was taken aback.

"But I took it in my stride, with a core belief that everything happens for a reason and instead of dwelling upon it, we should accept, learn and move forward.

"I decided to look ahead, focus on the future tournaments and prep myself for them."