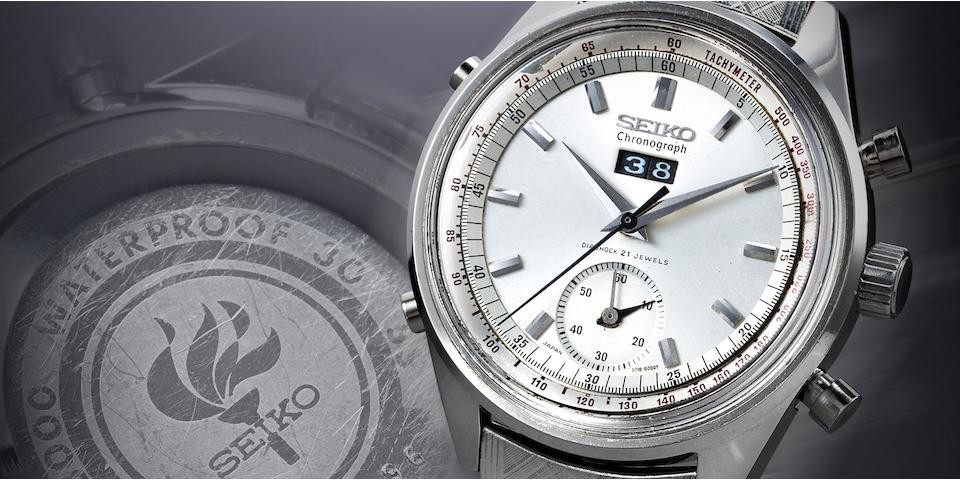 An extremely rare watch manufactured by Seiko to celebrate Tokyo hosting the 1964 Olympic Games is set to go up for auction next week with some estimates predicting it could fetch nearly £20,000 ($26,000/€22,000).

The stainless-steel Seiko chronograph bracelet watch with lap-counter and date display is being put up for sale by Bonhams in Hong Kong.

The online auction, titled "Making Waves: Seiko – A Private Collection of Japanese Wristwatches", is offering watches from a single owner who spent the past 15 years collecting Seiko's major vintage and modern watches.

Considered as the "holy grail" of Seiko timepieces, the legendary and exceedingly-rare Ref. 5718-8000 was produced in 1964 for the Tokyo Olympics as an effective sports counter.

The two iconic push buttons on the left of the watch allow wearers to easily adjust the 1's and 10's positions of the count graph – a function designed to count laps; while the single sub-dial located at six o'clock has both a continuous second and a 60-minute register.

The 1964 Summer Olympics in Tokyo was the event that helped launch Seiko as a global brand after they were given the opportunity to fulfil the role as official timekeeper instead of Omega, who had done it since Los Angeles 1932.

Seiko certainly did not waste the chance as the Japanese company produced the world's first fully electronic automated timing system.

The system used at the 1964 Olympic Games linked the starting pistol with a quartz timer and a photo finish apparatus was used to record finishing times.

This technology was not only useful for recording ultra-accurate finishing times at the Olympics, but the technology used in the Seiko Astron, the world's first "quartz clock" wristwatch, was based on it and the company's sales grew internationally.

Patek very rarely integrate logos to their dial, with this example produced in limited quantity in commemoration of the 1994 Winter Olympic Games in Lillehammer.