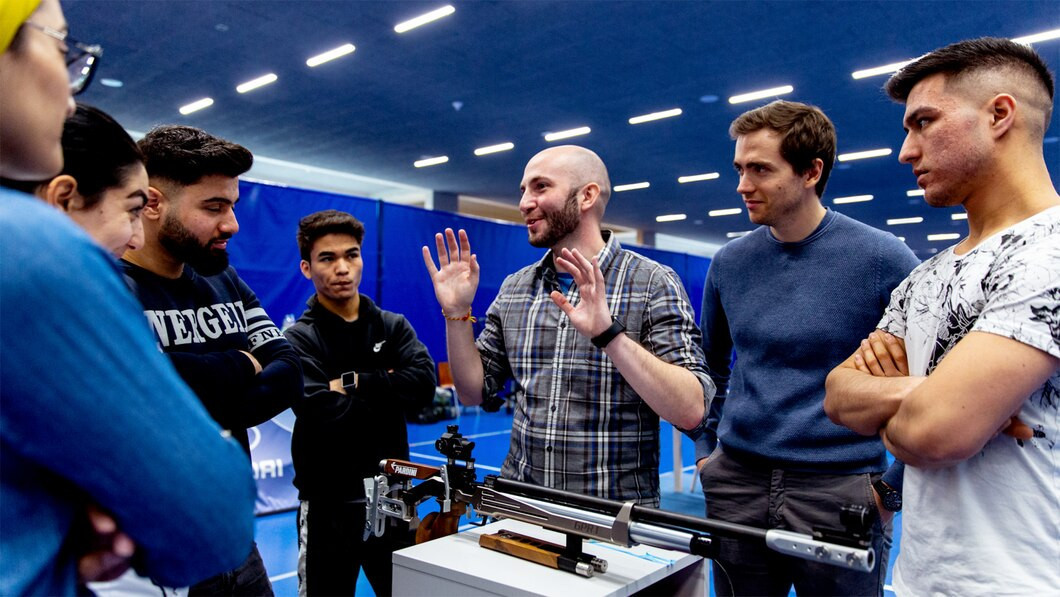 The Olympic Channel has released a five-part series showing the journey of three refugees who are training to become international shooters, under the guise of three-time Olympic champion Niccolò Campriani.

The Italian came up with the idea for the documentary, called Taking Refuge, which has been produced by Vice Media.

In March 2019, a selection process was undertaken, coinciding with the 500 Days to Tokyo 2020 milestone.

Originally intending to train one man and one woman, Campriani chose two women – who he struggled to differentiate – as well as one man.

All three are local refugees in Switzerland, where Campriani works in Lausanne as the sports intelligence manager for the International Olympic Committee.

To protect the athletes, the Olympic Channel have not disclosed their last names or Khaoula and Luna's birth countries.

For the two women, they are recognised refugees, while Mahdi is still an asylum seeker who has since been given permission to represent Afghanistan, doing so at the Asian Championships in November 2019.

Khaoula and Mahdi have in just over a year both made the minimum qualification target, making them eligible to qualify for the Tokyo 2020 Olympics, which have now been postponed to next year because of the COVID-19 outbreak.

Luna has since given birth, taking a break from the project.

Campriani said the athletes were aiming for the Paris 2024 Olympics but now Tokyo 2020 is a possibility, with the delay improving their chances of qualifying.

Speaking to insidethegames, Campriani said: "It's 365 days more of training so for them it's a game changer.

"Even if we are preparing for Paris 2024, we still have to go through Tokyo, so it doesn't hurt to try.

"You accept the challenge and you have to accept that you might not make it and I was always focusing on managing their expectations."

As part of the three-person set-up, the Italian, who won two golds at Rio 2016 and one at London 2012, had to send an "awkward email" to the Olympic Museum to request the return of his rifle to go towards equipment for the new athletes.

Since resuming training a couple of weeks ago, Khaoula and Mahdi are back to practicing three to four times a week.

Looking at what criteria he needed from the refugees, Campriani did not want people who simply wanted to go to Tokyo.

Excited to share the launch of a project close to my heart: coaching three refugee athletes for a shot at making the @Olympics in Tokyo. Do watch and retweet this trailer of #TakingRefuge produced by @olympicchannel pic.twitter.com/ayoOHhtEwe

"I was looking for more than someone who wanted to go to the Olympic Games, I wanted someone who was very clear about the purpose of the project," he said.

"For Khaoula it was to set an example for her son, or Mahdi to send a message to the world to the refugee community.

"There is no script in this series, they all speak with their hearts.

"For Mahdi you can see that it was about using sport as a means to an end.

"Now he can travel anywhere and that's the legacy of the project.

"The whole recruiting process was tough because we didn't know a lot about these candidates so we worked a lot with the respective social workers to understand where these people come from and if there's anything we need to be aware of."

Working alongside fellow Olympic champion, India's Abhinav Bindra, the documentary also shows the new shooters in India where they trained with some of the best in the world.

Bindra said that this is only the start of more to come, with both shooters aiming to develop the idea with athletes in different sports.

He said: "We're looking to interact with athletes going forward no matter what the sport and lend our expertise.

"Sport is important but it's also about using sport to change people's lives in a positive way."

Campriani added: "It has been the happiest moment of my career and that was after I retired."

Taking Refuge is now on the Olympic Channel, detailing the development of the three shooters on their way to success.