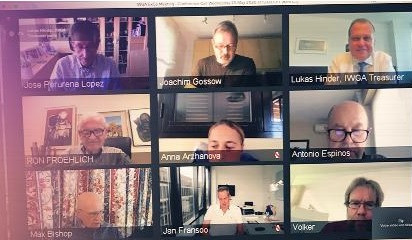 International World Games Association (IWGA) treasurer Lukas Hinder has insisted the additional costs stemming from the postponement of the World Games in Birmingham are manageable for the organisation.

Hinder informed members of the IWGA Executive Committee of the planned adjustments to the budget for the Games, pushed back from 2021 to 2022 because of the coronavirus crisis, at its first remote meeting.

The updated budget is set to be presented to the IWGA's 37 member federations during its Annual General Meeting in Lausanne on November 6.

IWGA President José Perurena, who has recovered after contracting COVID-19, said the AGM would go ahead on that date irrespective of the coronavirus pandemic and said it could be held virtually.

Joachim Gossow, chief executive of the IWGA, claimed the one-year delay to the next edition of its multi-sport event – renamed the World Games Birmingham 2022 following the postponement – provided opportunities for organisers.

Gossow said the Organising Committee was hopeful a new stadium being built in Birmingham, located in Alabama, could be used at the World Games.

Local organisers recently confirmed all venues had been secured for the postponed event, rescheduled for July 7 to 17 in 2022.

A message from our President José Perurena on the special occasion of the 40th anniversary of the International World Games Association ❤️#IWGAAnniversary #WeAreTheWorldGames @TWG2022 pic.twitter.com/sLTxdiL1V4

The IWGA Executive Committee said the postponement of the Games would not have an impact on the 2025 edition, set to be held in Chengdu.

"It has been agreed, together with the responsible officials in Chengdu, to stick to the planned schedule regardless of the postponement of the Games in Birmingham," the IWGA said in a statement.

The bidding process for the World Games after 2025 was also discussed by the Executive Committee, with the body deciding to adopt a "more flexible" approach, including on the timeline for the awarding of the event.

"We consider it necessary to keep the bidding process for the Games after 2025 more flexible, and not to make any specifications with regard to the time frame," said IWGA Executive Committee member Jan Fransoo, who developed a strategy paper on the process alongside World Karate Federation President Antonio Espinós.

"The principle of sustainability and a lean organisation has been valid for us since the foundation of the IWGA in 1980.

"These principles have proven themselves especially now, in the period of the coronavirus crisis.

"Together with our partners in Birmingham, we were able to react comparatively swiftly and without major problems.

"I think that we will be attractive to host cities in the future.

"They will see the benefits of running a top-class event that is associated with low risks for host cities but with sustainable advantages for them."

The World Games were moved from this year as the original dates in 2021 would have clashed with the re-arranged Tokyo 2020 Olympics.