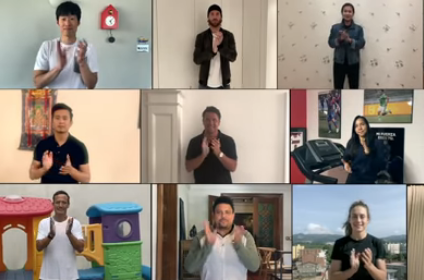 Fifty football stars have shown their support for healthcare professionals and other workers who are key during the coronavirus pandemic.

The players took part in a FIFA campaign which aims to celebrate those working during the pandemic, which has now infected more than 2.3 million people and resulted in more than 164,000 deaths.

A video was created showing the fifty stars clapping for the workers from their own homes.

"As footballers, we are used to receiving applause, but this time, we have the opportunity to show our appreciation for the many people who are risking their lives to protect ours," said England's David Beckham, who featured in the video.

"You are humanity’s heroes and we want to show that all of football supports you and everything that you do to defend all of us."

Other players included Gianluigi Buffon of Italy, Harry Kane of England and Yaya Touré of Ivory Coast, while England's Lucy Bronze, Vivianne Miedema of The Netherlands and Brazil's Marta were some representatives from women's football.

"To recognise the risks that doctors, nurses and other essential workers are having to take on a daily basis, football wants to show its support,” said Carli Lloyd, the two-time world and Olympic champion from the United States.

"They are on the front line of the coronavirus battle, working as a team to defend us, to protect us and to keep us healthy.

"It is thanks to their dedication and professionalism, supported by everyone else’s absolute commitment to following the rules of each national health authority, that we will win."