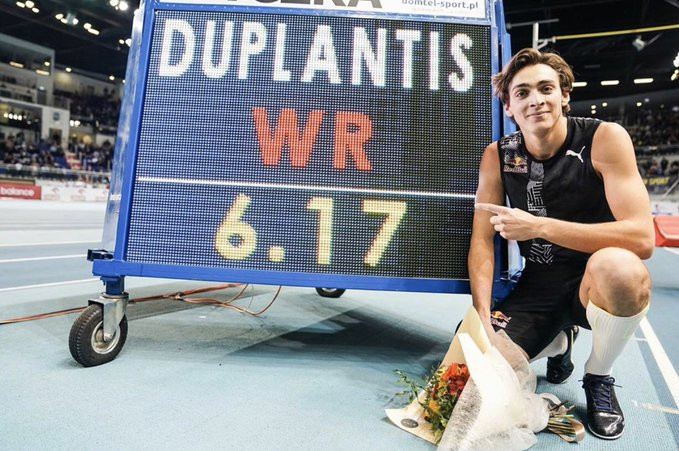 Competing in just his second event of the season, the 20-year-old cleared the height on his second attempt and his sixth jump of the night overall at this World Athletics Indoor Tour event at the Arena Torun.

He had come agonisingly close to breaking the world record four days ago in Düsseldorf, but did what he was threatening to do in Germany tonight to confirm his position as one of athletics' rising stars.

"It's so crazy because my whole life I wanted that moment right there," Duplantis said.

"I was a lot more focussed - I really wanted it."

Other winners on the night at this event which was a warm up for next year's European Athletics Indoor Championships included Belarusian hurdler Alina Talay.

She won the women's 60 metres in a time of 7.87sec ahead of Nigeria's Tobi Amusan and Christina Clemons of the United States, who shared a time of 7.89.

Justyna Święty-Ersetic set a Polish record to win the women's 400m in 51.37 - a result very popular with the locals.

Poland's Adam Kszczot could not quite win the men's 800m, losing out to Collins Kipruto of Kenya, who stopped the clock at 1min 45.86sec for a personal best.

Ukraine's Maryna Bekh-Romanchuk soared to a win in the long jump, with her best jump 6.96m, while the Czech Tomáš Staněk won the men's shot put ahead of Poland's Michał Haratyk.