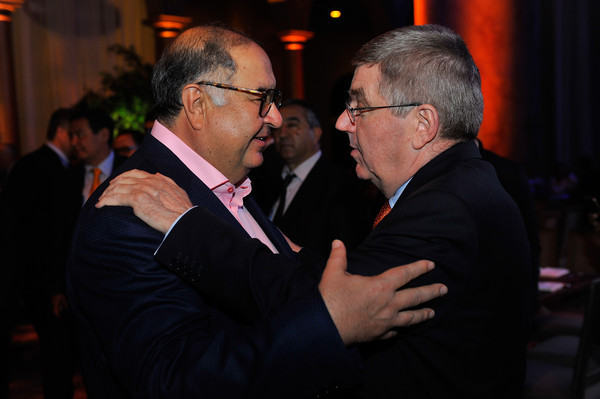 Alisher Usmanov, the Russian President of the International Fencing Federation (FIE) has urged Sir Craig Reedie, his counterpart at the World Anti-Doping Agency (WADA), not to turn the fight against doping into a "lynching".

In a strongly-worded open letter, circulated by the London-based public relations company Finsbury on the eve of a meeting of the WADA Executive Committee at which the credibility of the anti-doping system is widely perceived to be at stake, Usmanov, an exceptionally well-connected billionaire businessman, argued that, while the guilty "must definitely be punished as hard as possible", the innocent should not be "deprived of the most important human rights".

The letter was also copied to Thomas Bach, President of the International Olympic Committee (IOC), with whom Usmanov has a special bond since the German's Olympic sport was fencing.

The two men presented each other with awards at the 2019 FIE Congress in Lausanne recently.

Stanislav Pozdnyakov, President of the Russian Olympic Committee, is also a former fencer and winner of an Olympic gold medal in the team event at Barcelona 1992.

In fact, fencers are at the centre of this story as Russia's Sports Minister Pavel Kolobkov is also from the sport.

He won four Olympic medals during his fencing career, including the gold medal in the épée at Sydney 2000.

WADA’s supreme policy-making body faces extreme pressure from both sides of the argument as it ponders whether to fully endorse proposals relating to Russia that were tabled last month by the agency’s Compliance Review Committee (CRC).

These could result in Russia’s presence and participation in international sport being severely reduced for a period of four years, although the CRC stopped short of advocating a blanket ban on Russian competitors.

The text of the letter from Usmanov, who used to be a major shareholder in Arsenal Football Club, read as follows:

“As the President of the International Fencing Federation I understand the importance of the matters that will be considered on December 9, 2019. I fully support the most severe sanctions against any doping offenders but only if the decisions are fair and based on general principles of law and the Olympic Charter.

"While actually recognizing that the Russian Olympic Committee is blameless the Compliance Review Committee recommends to prohibit the participation of its elected representatives at the most important sport events which will unquestionably discriminate clean Russian athletes against other athletes. The ban to flow [sic] Russia’s flag is another obvious discrimination because the ability of an athlete to compete under the flag of its country is not a special privilege but the basic human right of any athlete.

"The ruthless fight against doping shall not be turned into lynching and the application of new sanctions for the second time for the same doping violation. While guilty ones must definitely be punished as hard as possible the innocent ones shall not be deprived of the most important human rights."

Usmanov continues in his letter to urge Sir Craig to ensure that Russian athletes are not prevented from competing in international competitions.

The CRC has alleged that data from the Moscow anti-doping laboratory was manipulated before being handed over to investigators, as required under conditions for reinstating the Russian Anti-Doping Agency (RUSADA)’s compliance with the World Anti-Doping Code in September 2018.

The CRC now wants RUSADA declared non-compliant again for failing to provide an "authentic" copy of the data.