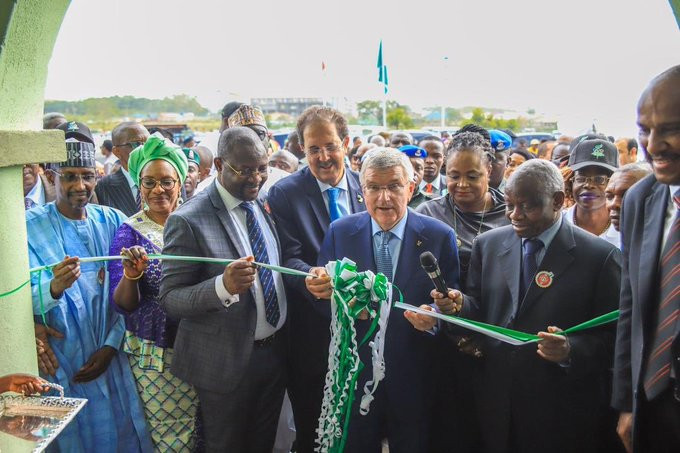 Bach called Nigeria the Olympic capital of the continent as he joined the country's Sports Minister Sunday Dare and under-fire ANOCA President Mustapha Berraf at the event.

The IOC President was flanked by Dare and Nigerian Olympic Committee President Habu Gumel at the ceremony, part of his tour of Africa this week.

"The commitment of Nigeria to the completion of this edifice has been unwavering," said Bach.

"It is for this reason that the Federal Government ensured the continued funding of the project from inception to completion.

"It is my sincere hope that the vision for which the project was executed would be achieved for the benefit of all stakeholders."

The opening of the new headquarters comes amid a difficult time for ANOCA as the umbrella body remains in crisis.

Berraf, who became a member of the IOC this year, is facing calls to resign as the head of the continental organisation after a vote of no confidence was anonymously circulated last month.

A letter sent from an anonymous address demanded Berraf, ANOCA secretary general Ahmed Abou Elgasim Hashim and Gumel stand down from their positions following allegations of mismanagement, a lack of financial transparency and of betraying the trust of National Olympic Committees.

Bach's visit to Africa marks the first time he has been seen in public with Berraf, who denies wrongdoing and claimed the accusations were "completely false."

Berraf is also embroiled in scandal in his role as President of the Algerian Olympic Committee (COA) after the country's Sports Minister accused him of corruption and financial mismanagement.

The 65-year-old disputes the accusations and alleges his detractors are guilty of "misleading and defamatory manoeuvers" to "undermine his image and that of the COA".

Berraf would lose his IOC membership if he is ousted as COA President, as he was elected to the body as an NOC representative.

IOC chief ethics and compliance officer Pâquerette Girard Zappelli is aware of the allegations against Berraf.