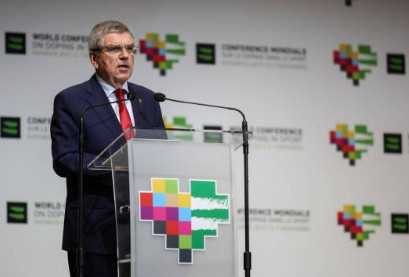 International Olympic Committee (IOC) President Thomas Bach has hit back at claims that athletes are not fully represented on the World Anti-Doping Agency (WADA) Executive Committee or Foundation Board.

Slovakia's Danka Barteková, an Olympic shooting bronze medallist, is the only current competitor who sits on WADA's Executive Committee.

She is a member of the IOC Athletes' Commission and is one of five representatives of the Olympic Movement.

Canada's Olympic cross-country gold medallist Beckie Scott is chair of the WADA Athlete Committee, but while she is able to attend Executive Committee meetings, does not have a vote.

They have regularly faced criticism, though, that they serve the interests of the IOC and not the wider athlete community.

"We call on WADA to implement proven solutions to ensure athletes’ views are no longer cast aside, and we stand ready to consult on specific policies and procedures" - says @GlobalAthleteHQ Start-Up. With a new President, will change finally be coming? @WitoldBanka #WeAreAthlete https://t.co/uo2SXZAGkk

Bach today took issue at this and claimed, at the fifth World Conference on Doping in Sport here, they deserved to be there because they were the democratically elected voice of athletes.

"At the outset, let us set the record straight regarding athletes' representation in WADA: the fact is that the athletes already have representation in the WADA Executive and Foundation Boards," he told delegates.

"The IOC made this representation of athletes possible by giving up seats of the sports movement in favour of the democratically elected athletes' representatives."

The 35-year-old Bańka only retired from athletics in 2012 having won a gold medal at the 2007 Summer Universiade in Bangkok as part of Poland's 4x400 metres relay squad.

His vice-president is set to be China's Yang Yang, a double Olympic short track speed skating gold medallist, as the Olympic Movement's representative.

The Dominican Republic's Marcos Diaz, a former marathon swimmer, is also set to enjoy a major role within WADA from next year.

British Paralympic silver medallist Ali Jawad, member of pressure group Global Athlete, warned last month that Bańka would have failed if athletes were not given a bigger role in the decision-making process.

"The IOC fully supports the incoming WADA President as a former athlete and put forward an Olympic champion as WADA vice-president," Bach said.

"And we are happy to see with Marcos Dias another athlete as co-ordinator of the public authorities.

"Taken together with the existing athletes’ representation on the WADA decision-making bodies, this puts the athletes in the driver’s seat of WADA.

"The IOC continues to fully support this positive development.

"The elected members of the IOC Athletes’ Commission enjoy full legitimacy through the democratic election by all the Olympic athletes during the Olympic Games.

"They are the ones who can speak on behalf of those who elected them - the athletes.

"This democratic principle also obliges them after their election to stay in contact, consult and co-operate with their constituency, which consists of all Olympic athletes from all sports and all parts of the Olympic Movement.

"In this way, they represent a truly global athletes' voice, representing all sports, all NOCs (National Olympic Committees), big and small, whether from the North or South, from East or West."