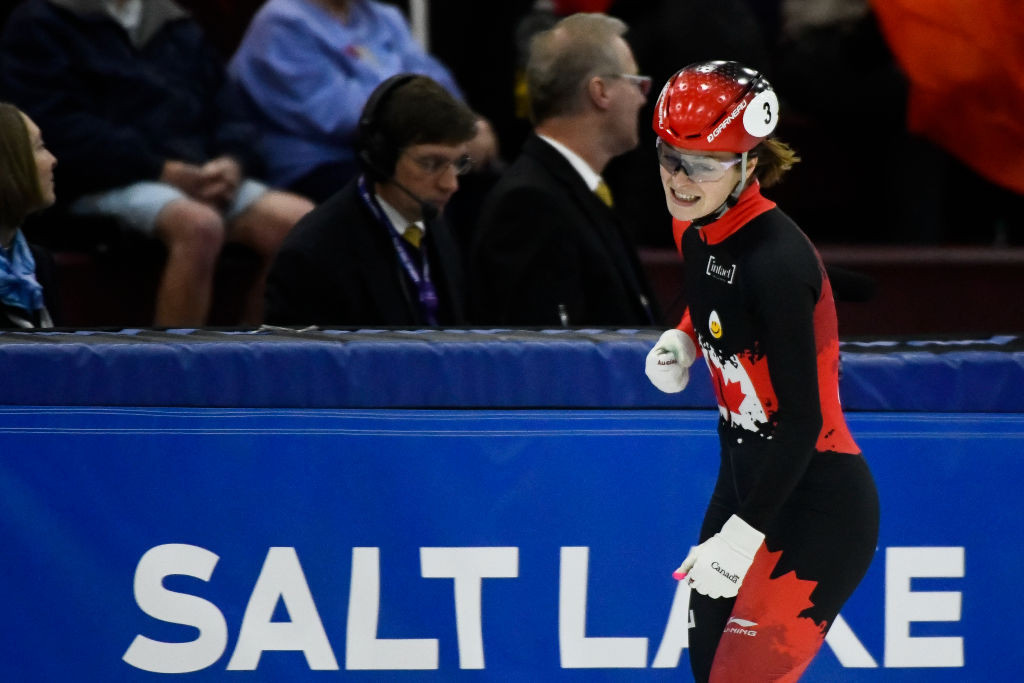 The 24-year-old, who won yesterday's 1,500m final, gave her rivals an almost impossible target as she blitzed to a world-record time in the quarter-finals.

Boutin, who rekindled her love for the sport with a training camp in The Netherlands over the northern summer, shot to another fast start in the final and never really looked likely to relinquish that lead, finishing in a time that was just 0.001 of a second outside Christie's old record.

That left China's Qu Chunyu to take the silver medal in 42.452, with reigning world champion Lara van Ruijven of The Netherlands finishing third in 42.858.

"It's a great start to the season and for me it's the strongest ice to race because it's fast and you need to be balanced.

"It's an amazing start and I hope to be on this progression until the end of the season."

South Korea's Hwang Dae Heon was the other individual double gold medallist in Salt Lake City, picking up a win in the men's 1,000m to add to his 500m victory from yesterday.

Hwang seized the initiative on lap six and kept it to the finish, triumphing in a time of 1:23.948.

At the back of the pack, six-time Olympic champion Victor An let the other skaters use up their energy and then, with a trademark burst of speed, came up the inside around the final corner to pass fellow Russian Semen Elistratov and South Korea's Park Ji Won and secure the silver medal in 1:24.134.

Park's sprint for the line gave him the bronze medal ahead of China's Han Tianyu and Elistratov, yesterday's 1,500m gold medallist.

Elistratov and An were joined on the men's 5,000m gold medal-winning Russian team by Daniil Eybog and Pavel Sitnikov, with the quartet clocking a time of 6:43.662.

Reigning world and Olympic champions South Korea, whose team was made up of Choi Min Jeong, Kim Alang, Kim Ji Yoo and Noh Ah Rum, were the runners-up in 4:08.979, while Canada's Alyson Charles, Claudia Gagnon, Danae Blais and Boutin rounded off the podium in 4:09.009.

With all of yesterday's men's 500m medallists choosing to race the 1,000m today, the ice was left clear for China's Wu Dajing to take victory.

Wu picked up his 15th ISU Short Track Speed Skating World Cup medal at this distance in 39.702, making up for yesterday's disappointment when he fell in the final.

In the women's 1,000m event, reigning world and Olympic champion Suzanne Schulting of The Netherlands prevailed in 1:28.517.

Junior world record holder Seo Whi Min of South Korea sent herself and Russia's Sofia Prosvirnova sprawling across the ice after changing lanes when the pair were vying for the silver-medal position.