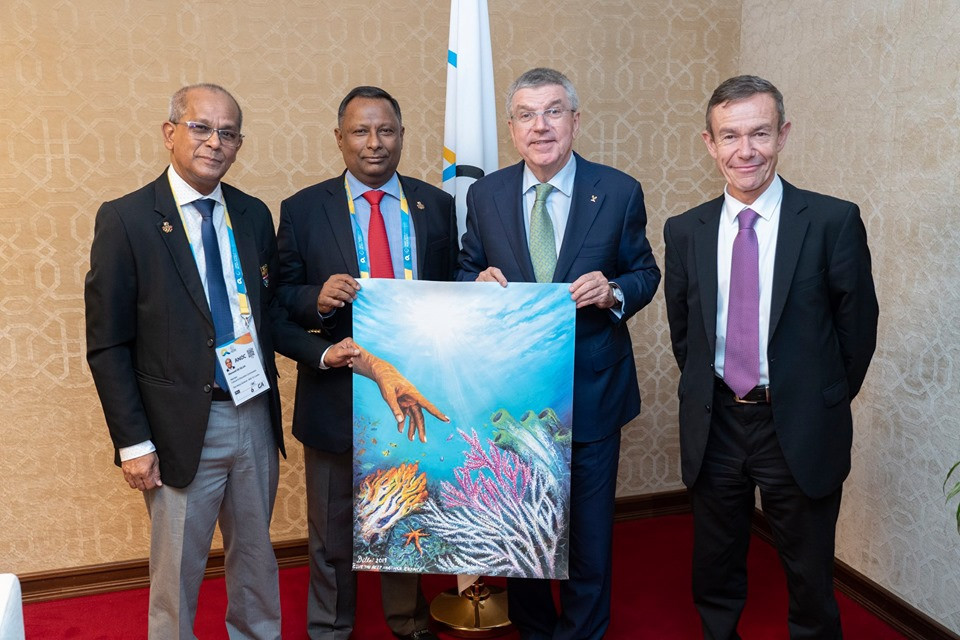 The painting by Sri Lankan artists Dillai Joseph was titled "Give the Reef another chance" and came about through an environmental sustainability programme which looked at the rejuvenation of the coral reef in Sri Lanka.

"I, as an artist, have tried to capture the essence of this endeavour in my painting," said Joseph.

"It is no longer sufficient to conserve coral reefs, rather it is to go one step further, where proactive human intervention is needed to restore the reefs."

She added: "The stance of the human hand is also to have resemblance of the famous frescoes in the Sistine Chapel 'The creation' and drawing a parallel, where we as humans have the ability to give life back to coral reefs not merely to stop at conservation.

"I have tried to depict the bright colour scheme underwater and texturised the corals to give a better effect."

Joseph said she hoped her painting could inspire others to do more to help the environment.

"I wish to gift this painting, which is acrylic on canvas, to the IOC as a token to celebrate Olympic values and the remembrance of this work done in Sri Lanka with the NOC team to encourage how we can work together to bring back what was lost and it is not too late to keep trying.

"It is a very dear painting to me and I wanted to part with the original as I believe this can inspire many beyond borders.

"We need to do this for the generations to come so that they too will enjoy the planet and value it."