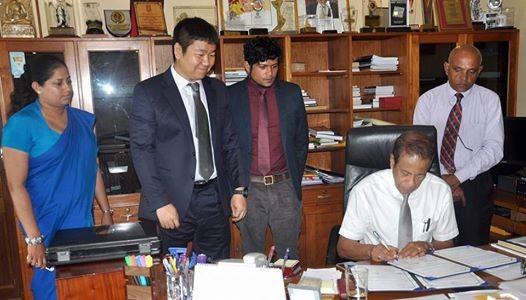 A Memorandum of Understanding (MoU) has been signed between between the National Olympic Committee of Sri Lanka (NOCSL) and the Seoul Youth Center for Cultural Exchange (MIZY Center) in order to distribute shoes for athletes.

As part of a "Hope" project first begun in 2007, the MIZY Center have worked with other countries in order to provide the South Korean Youth to "actively engage in cultural exchanges and global sharing".

This comes with the broad aim of "cultivating peace among people around the world".

Under the terms of the agreement, 1,500 pairs of shoes have been offered for students and young people in Sri Lanka.

It will also "increase mutual intimacy between the two countries", it is hoped.

"We believe this would expand the path ahead for more opportunities to grow peace, friendship among people who are exposed to cultural and global issues, which is the precise wish of the MIZY Center," said the NOCSL in a post on Facebook.

It comes as Sri Lanka continue to chase a first Olympic gold medal and a first podium finish since Susanthika Jayasinghe earned 200 metres silver at Sydney 2000.