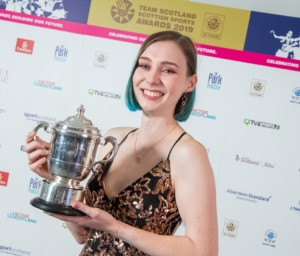 Seonaid McIntosh has become the first shooter ever to lift the Emirates Lonsdale Trophy as the 2019 Scottish Sportsperson of the Year.

It follows an outstanding season that saw McIntosh become the first British woman to win an individual title at the International Shooting Sport Federation World Championships.

She triumphed with a perfect last shot of 10.9 in the women’s 50 metres rifle prone final at the 2018 edition of the global event, held in South Korean city Changwon in September.

McIntosh also anchored Great Britain to its first-ever team medal in the event and secured a Tokyo 2020 Olympic quota place for Britain in the rifle three positions.

At World Cups this year, she won first-ever medals for a British female athlete, including silver and gold in 50m rifle three positions and silver in the 10m air rifle.

A subsequent world record and rise to world and European number one in the most recent rankings has capped a fantastic year.

McIntosh put her name on the Emirates Lonsdale Trophy after being named Female Athlete of the Year.

McIntosh’s success came on a superb night for her family at the Team Scotland Scottish Sports Awards.

Her father and coach, Donald McIntosh, took the Coach of the Year award.

He also coached elder daughter Jennifer to a fitting farewell performance as she won a world bronze medal in the women’s 50m rifle prone team event, alongside Seonaid and Zoe Bruce, before announcing her retirement from top-level competition.

Last year’s Emirates Lonsdale Trophy winner, Duncan Scott, was given the nod for Male Athlete of the Year.

The 22-year-old swimmer had another sensational year, which saw him claim a bronze medal in the men’s 200 metres freestyle event at the World Aquatics Championships in Gwangju in South Korea.

Scott did not shake hands with Sun Yang or pose for photos on the medal rostrum after the controversial Chinese, who served a three-month drugs ban in 2014, won the event.

Sun screamed angrily in Scott's direction as he climbed onto the podium and the now 11-time world champion allegedly called the Briton a "loser2 as the medallists were walking away.

Scott followed up his bronze medal-winning performance with the second fastest freestyle relay split of all time, 46.14sec, in the men’s 4x100m medley relay.

He swam incredibly to come from over a second behind to anchor Britain to the gold medal in a European record time of 3min 28.10sec.

Cycling had a hugely successful night, boasting the winners of both Para-Sport Athlete and Young Athlete of the Year.

Neil Fachie, with pilot Matt Rotherham, took the Para-Sport award for the second year in succession after winning gold and silver medals at the 2018 Road World Championships in Rio de Janeiro, despite a spectacular crash on the final bend of the tandem B sprint event.

In contrast, at the start of his sporting career, Charlie Aldridge was the winner of the Sir Peter Heatly Trophy as Young Athlete of the Year following his historic win at the World Junior Mountain Bike Championships.

The first British male athlete ever to win the gold medal and the rainbow jersey in the cross-country event, his journey back from major shoulder surgery to top the World Championships podium marked him out as a future star.

There were huge receptions for boxer Taylor and lawn bowls duo Alex Marshall and Paul Foster, popular winners of Sporting Moment of the Year and Team of the Year respectively.

Taylor's brilliant win over previously unbeaten Belarusian Ivan Baranchyk to lift the International Boxing Council world super-lightweight title, was the moment that captured the majority of the public vote.

Marshall and Foster’s World Indoor Championships gold medal-winning performance and a strong showing at the Atlantic Rim Championships gave them the edge over Scotland women’s football and Scottish wheelchair curling for Team of the Year.

Olympic lightweight champion at Melbourne 1956, Dick McTaggart was honoured with the Lifetime Achievement Award in recognition of an outstanding boxing career.

His overall record was phenomenal, winning 610 of 634 amateur bouts, and encompassed Olympic gold and bronze, Commonwealth Games gold and silver and the European title.

McTaggart remains Scotland’s only Olympic boxing champion to date and has inspired countless others in the sport.

"This has been a fantastic celebration of what has been and continues to be a golden year for Scottish sport, as well as a chance to look back and recognise the inspirational achievements of previous generations who paved the way for today’s stars," Paul Bush, chair of Commonwealth Games Scotland, said.

"A huge thank you to our partners and sponsors, whose support has made this fantastic event possible and enables us to properly recognise the achievements of the individuals, teams and organisations that help to put Scotland on the sporting map.

"There is much to look forward to before 2019 ends, not least Glasgow playing host to the European Short Course Swimming Championships in December, and of course in 2020 the eyes of the world will turn to Tokyo as it plays host to the Olympic Games and Paralympic Games.

"I am quite sure we will be celebrating our athletes’ achievements at these and other major events this time next year."