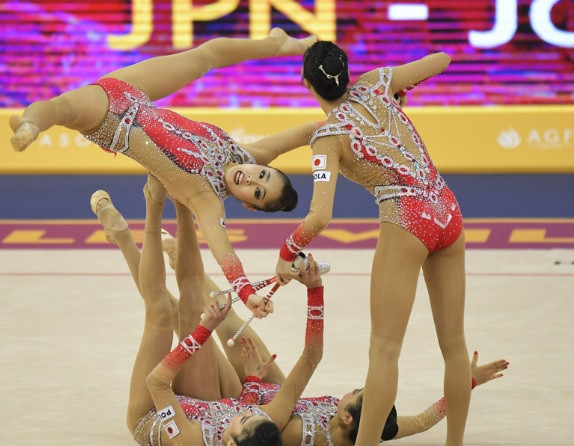 A clean sweep of Russian gold medals at the Rhythmic Gymnastics World Championships was avoided on the concluding day as Japan won the group 5 balls final in Baku.

However, normal service was resumed with the last event of the International Gymnastics Federation competition as Russia topped the podium in the group 3 hoops and 2 pairs of clubs final.

Having come within half a point of Russia in the previous day’s group all-around event in Baku’s National Gymnastics Arena, Japan offered further evidence of their talent as they won the group 5 balls competition with a score of 29.950.

It marked the first time Japan had claimed a world title in the discipline.

HISTORY for Japan ?? in Rhythmic Group Gymnastics❗ For the first time ever, the Japanese Group has won a world title, and it came with the 5 Balls at #RGBaku2019! #Gymnastics pic.twitter.com/RSn4qYLp3J

The final event had a more familiar look to it as Russia finished top with 29.450.

Japan were only half a point behind them, and Italy took bronze with 29.200 in what was a very tight contest as Belarus were fourth on 29.100 points.