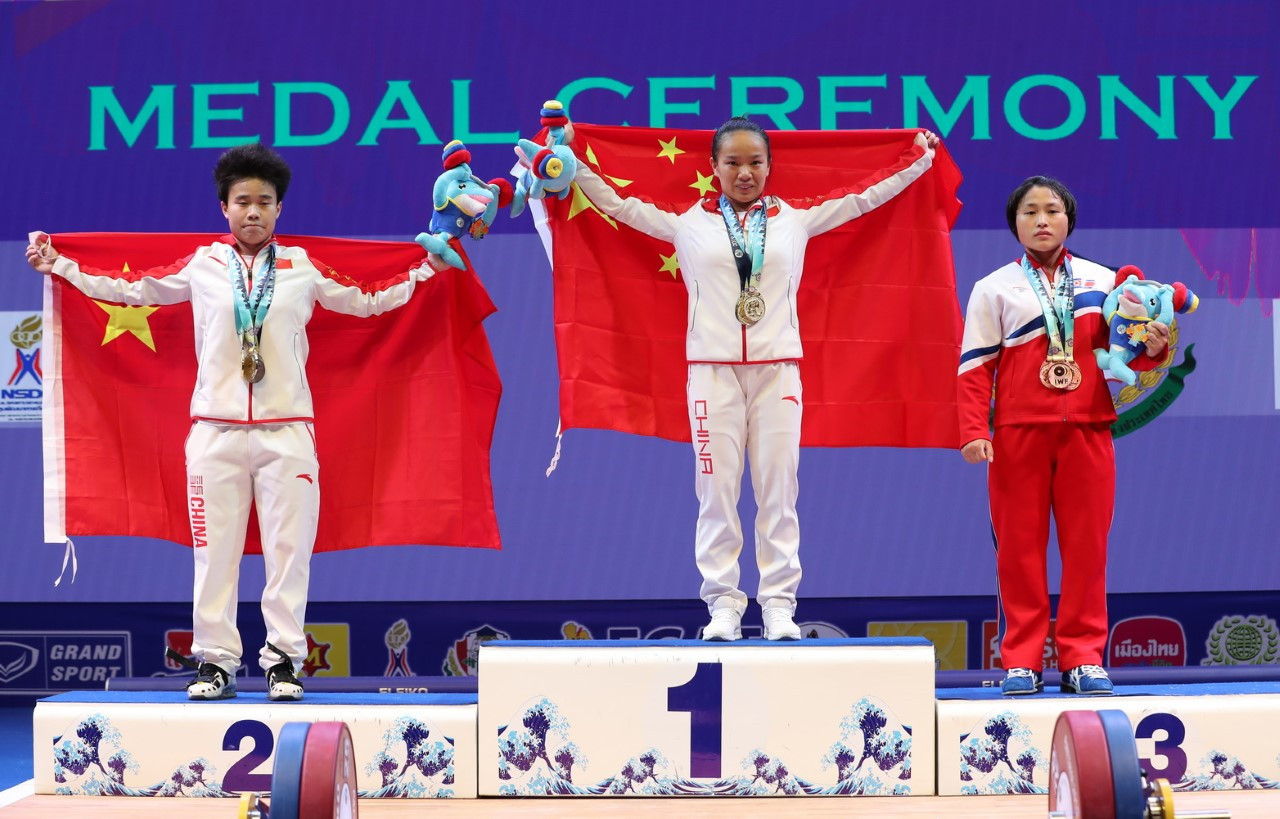 The 21-year-old lifted 118kg with her final clean and jerk attempt to move onto a total of 212kg, bettering the mark of 211kg set by compatriot Hou Zhihui just moments earlier.

In the snatch, both Hou and Jiang – the respective silver and bronze medallists at last year's IWF World Championships in Turkmenistan's capital Ashgabat – ended on 94kg, with victory going to the former by virtue of the fact she completed the lift first.

Hou attempted to break her own snatch world record of 95kg, but failed at 97kg.

The bronze medallist in all three categories was North Korea's Ri Song Gum after she registered 89kg in the snatch and 115kg in the clean and jerk for a total of 204kg.

It showed the strength of the field that 2017 world champion Chanu Saikhom Mirabai of India could not claim a medal, finishing fourth overall with a total of 201kg.

There was also an impressive performance by 17-year-old Indonesian Windy Cantika Aisah, who improved her own youth world record in the snatch, from 81kg to 82kg, as well as those in the clean and jerk, from 98kg to 100kg, and the total, from 179kg to 182kg.

His final mark of 318kg, which bettered the 317kg set by defending champion Eko Yuli Irawan of Indonesia at Ashgabat 2018, was made up of a world record-breaking lift of 145kg in the snatch and 173kg in winning the clean and jerk.

Li had one attempt to break Irawan's clean and jerk world record of 174kg, but failed at 175kg.

Irawan was the overall runner-up with 306kg, having finished second in the snatch with 140kg and fourth in the clean and jerk with 166kg.

Third place went to Colombia's Francisco Antonio Mosquera Valencia with 302kg, after he ranked sixth in the snatch with 130kg and second in the clean and jerk with 172kg.

Japan's Yoichi Itokazu was the snatch bronze medallist on 135kg, while China's Qin Fulin 171kg rounded off the clean and jerk podium.

Qin, the 2018 bronze medallist behind Irawan and Li, had earlier bombed out of the snatch after two unsuccessful attempts at 136kg and one at 138kg.

Action in Pattaya continues tomorrow, with medals set to be awarded in the men's 67kg and women's 55kg categories.