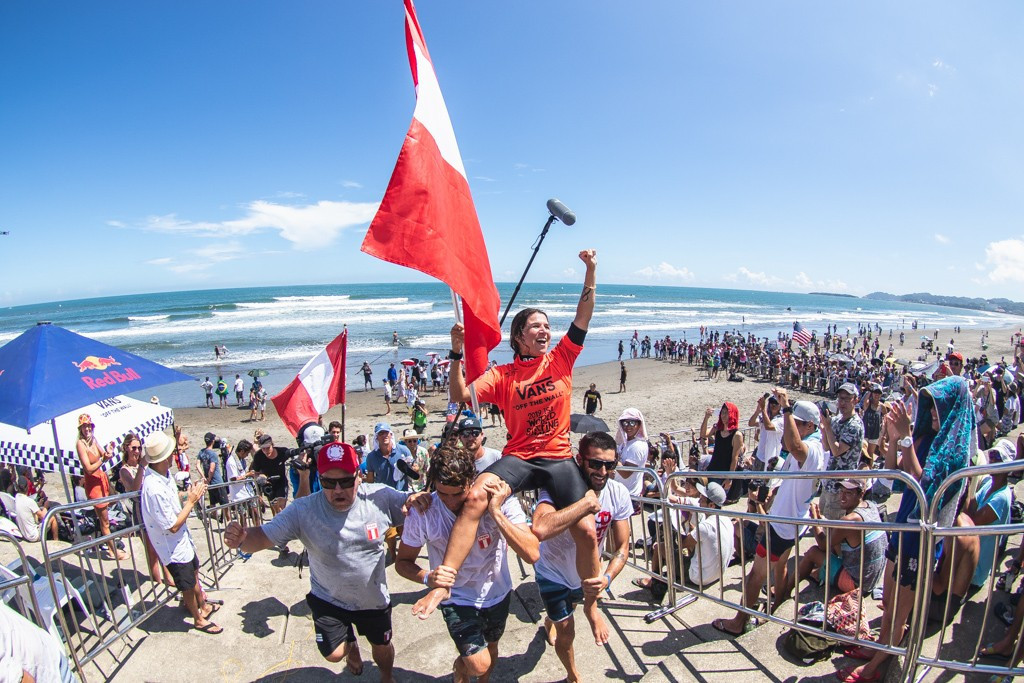 The 36-year-old was awarded 13.80 points after today's final in Miyazaki in Japan to add another title from the elite International Surfing Association (ISA) event.

Mulánovich first struck gold in 2004 in Ecuador and is now a real contender for glory when surfing makes its Olympic Games debut at Tokyo 2020.

"I feel like I am in a dream," said Mulánovich, who found two waves worth scores of 7.2 and 6.6 en-route to victory.

"It's so amazing to be here and win a gold medal against the best surfers in the world.

"It's been so long and it's a magical moment.

"This gold medal means the world for surfers in Peru.

"Three Peruvians just won golds at the Pan Am Games in Lima and winning here just adds to that.

"Surfing is growing so much in Latin America and Peru and is here to stay."

Silvana Lima of Brazil took silver on 12.77, with South Africa's Bianca Buitendag in bronze on 12.64.

The copper medal, awarded in surfing to fourth place, went to American Carissa Moore on 12.6.

"This final was a validation of the truly universal competitive landscape of our sport," said ISA President Fernando Aguerre.

"Sofia has had a long career as a professional surfer and coming back after her gold medal 15 years ago against this group of stars is incredible for her.

"This gives Sofia a great position to head into the 2020 ISA World Surfing Games to seek out one of the Tokyo 2020 qualification slots for the women.

"I am sure she is going to go to bed tonight thinking about her chances for 2020."

Edito Alcala of The Philippines bagged the best single wave score of 9.17, but Argentina's defending champion lost in his heat to Brazil's Filipe Toledo and Mexico's Alan Cleland.

Brazil's Italo Ferreira was among other heat winners, despite arriving late in Japan due to a robbery which caused him visa problems.

The ISA Aloha Cup, a team relay event, will be held tomorrow while the men's event continues.