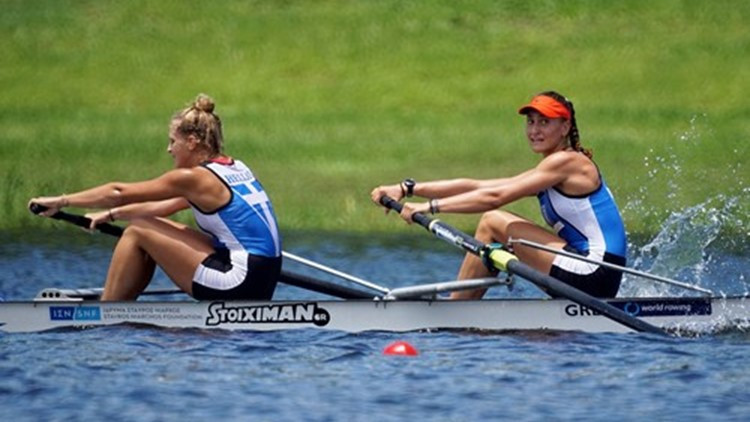 Greece’s Christina Bourmpou and Maria Kyridou produced the outstanding performance on day three of the World Rowing Under-23 Championships in Florida as they took four seconds off the world best time for the age-group in reaching the final of the women’s pair.

On a day of semi-final racing delayed due to threat of more heavy rain following the previous afternoon’s thunderstorms at the Nathan Benderson Park regatta course in Sarasota-Bradenton, the Greek pair made their intentions clear as they moved into an early lead they would never lose.

By 1500 metres the gap was huge, and in sunny conditions they pushed on to record a time of 6min 58.68sec that shattered the existing record from 2014.

The US and New Zealand claimed the other two qualifying places.

The second semi-final was won by South Africa’s Tayla-May Bentley and Jessica Schoonbee.

Russia’s Elena Danliuk and Ekaterina Glazkova followed them home, with The Netherlands beating Britain to the third spot by 0.02 seconds.

Britain’s men’s quadruple sculls came within a second of the under-23 world best time as they finished almost six seconds clear of the Czech Republic and New Zealand in 5:40.940.

The British crew has three members of the 2018 under-23 world champion crew - Josh Armstrong, Sam Meijer, Matthew Haywood - who have now been joined by George Bourne.

Italy won the second semi-final ahead of Germany and Romania.

In the lightweight women’s single sculls Susannah Duncan of Britain won the first semi-final from Germany’s Johanna Riechardt and Lara Tiefenthaler of Austria.

The second semi-final was won by Switzerland’s Olivia Nacht ahead of the US and Hong Kong.