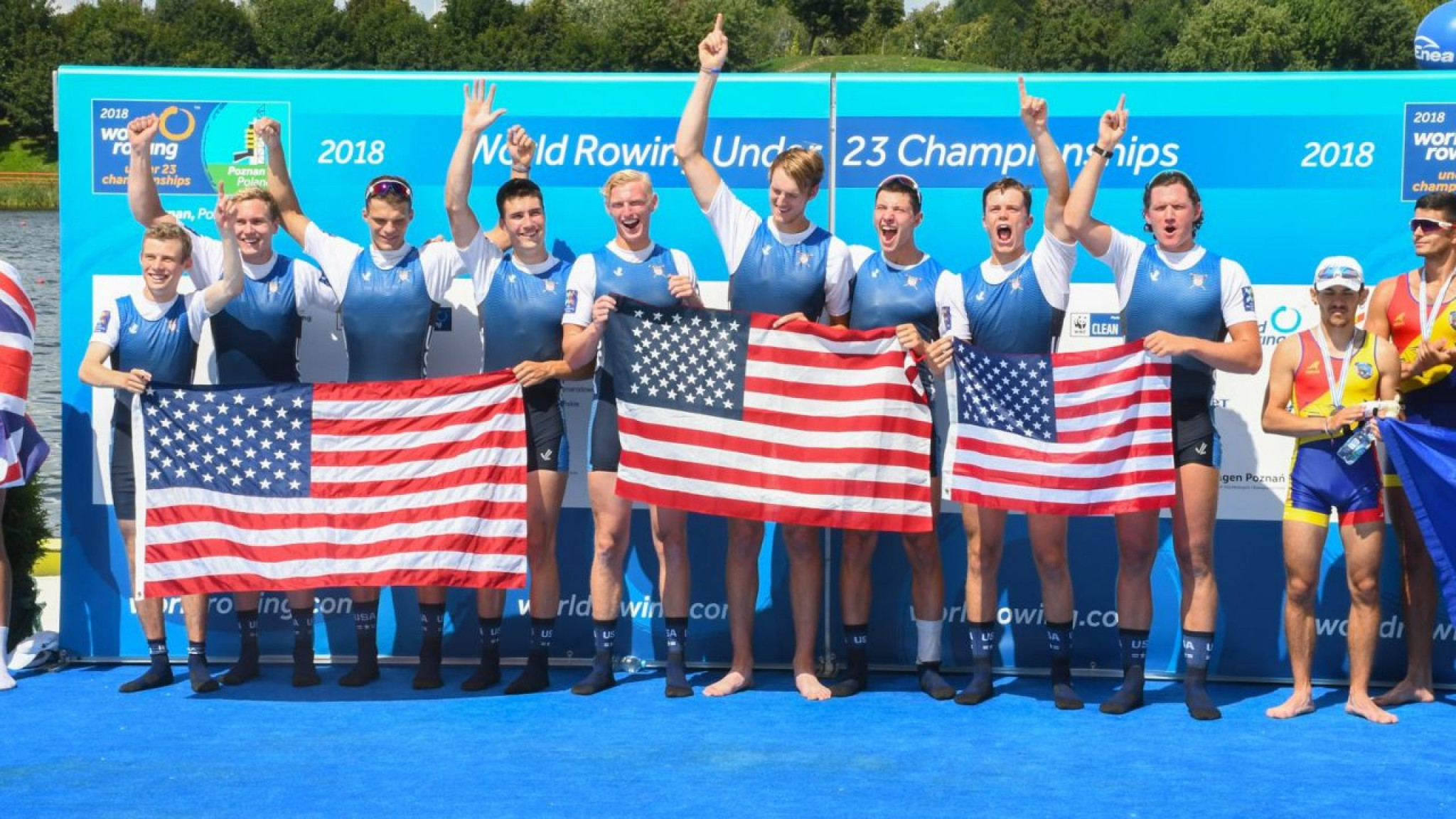 The United States finished on a high at the World Rowing Under-23 Championships in Poland as its men's eight won the last race of the regatta to bring their total of golds over two days of finals to five.

That left the US - who won four golds yesterday - two ahead of Britain and Italy in the gold medal rankings, and their total of eight medals left them level second with Britain but behind the Italian total of 12 on Poznan's Malta Lake.

The eight took the lead at the 500 metre mark and 1,000m later had an eight-seat lead which it retained to the finish, crossing in 5min 22.48sec, an under-23 world best time.

With defending champions The Netherlands off the pace, and destined to finish fifth, Britain and Romania took silver and bronze respectively, separated by less than a hundredth of a second after both being credited with 5:24.93.

It was a memorable day for British rowers too as they recorded their best performance in these Championships, with all three of their golds coming on the second day of finals.

Three golds matched the previous best haul from the 2011 Under-23 Championships, and the overall total of eight was the best ever.

Grant led at the line by two clear lengths from Australia’s Wallis Russell, finishing just a second off the world best time.

Hodgkins Byrne and Thornton, both of whom claimed under-23 gold last year as part of the women’s quadruple sculls crew, won by half a length from Germany having led from the start.

The men’s quad won by over a length from Italy, with Meijer adding a second gold to the one he won in the double sculls last year, and Armstrong adding under-23 gold to the junior version he won in 2015.

"Considering that we have only been together for two and a half weeks, it's an extremely exciting project," said Law.

New Zealand's Samantha Voss, making her world under-23 debut, overhauled Emily Kallfelz of the US in the closing stages to win the women's single sculls title in 7:28, just a second off the world best time.

"That was really hard but really amazing," said Voss.

"Eighteen months ago I broke my ankle and was told I would never row again so to recover and to win here is amazing."

The new Greek double sculls pairing of Ioannis Kalandaridis and Christos Stergiakas had ideal preparation for the imminent European Championships in Glasgow as they won a sprint finish ahead of The Netherlands and Poland.

Brazil's defending champion Uncas Batista, so impressive in the heats, followed through with gold in the lightweight men's single sculls ahead of Hugo Beurey of France and Sean Murphy of Australia.

Happy Russians after taking home 🥇in the BW4- pic.twitter.com/NbxsLMcWHT

China's crew in the women’s four final contained only one rower who had raced internationally before, but they took bronze in a race where Russia held off Romania for the gold.

Canada made a successful defence of their title in the women's eight, overtaking the US in the third 500m and bringing The Netherlands through for silver.

Spain's Manel Balastegui and Rodrigo Conde Romero held on to win the lightweight men’s double sculls by 0.37sec from fastest-finishing Italy, who had half of the 2017 gold medal-winning crew in Gabriel Soares, with new partner Alfonso Scalzonie.

Stefania Buttignon and Silvia Crosio of Italy, fastest qualifers for the lightweight women’s double sculls final, carried on in similar vein, winning in a world best time of 6:54.41, well clear of silver medallists Britain and Germany, who took bronze.

Romania won the men’s four with something to spare, but the race for silver was incredibly close, and Britain won it over New Zealand.