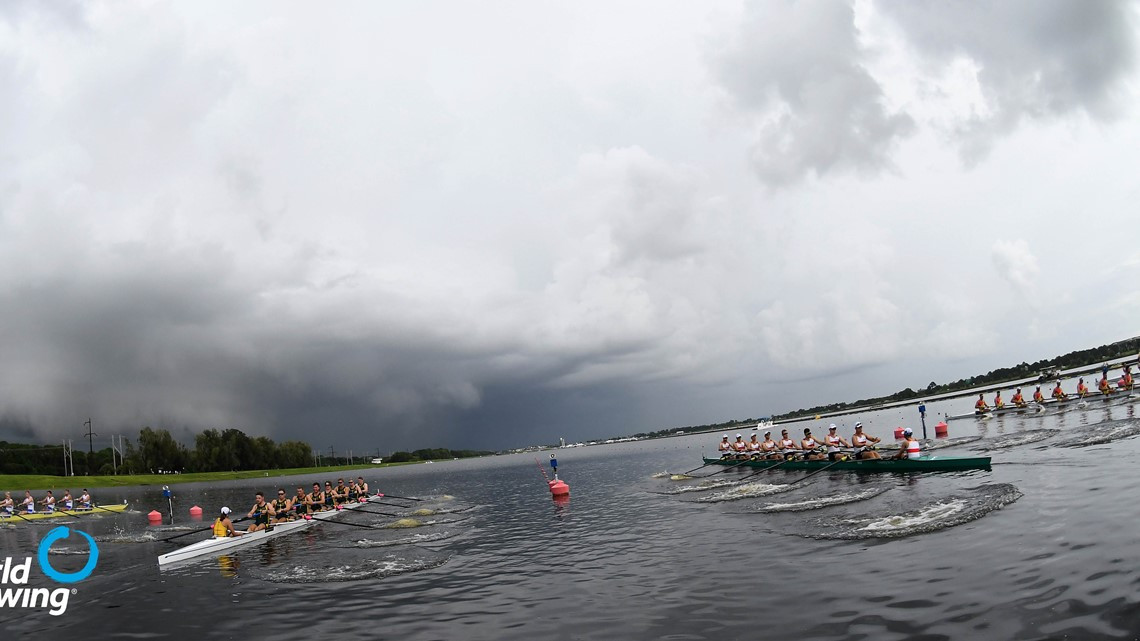 Heats and humidity continued on day two of the 2019 World Rowing Under 23 Championships, although there was thunder, rain and lightning later at the Nathan Benderson Park regatta course in Sarasota-Bradenton, Florida as the flagship British and home eights limbered up impressively.

The British men’s eight, mirroring the strength of their senior compatriots, retained four of the crew that had won silver last year and they dominated heat one as they recorded the fastest qualifying time, 5min 34.620sec.

A Romanian crew composed of 18 and 19-year-olds held off Germany for the second automatic qualifying spot.

In a second heat affected by the onset of the late downpour, the home eight, with five of the crew that won gold last year, led from start.

During the second half of the race, lightning arrived and spectators were told to move to the safe zones, but the US blitzkrieg continued as they finished clear winners, with the Dutch crew finishing a distant second.

Automatic places in the final were on offer to the winners of the two heats in the women’s double sculls and Hungary’s Vivien Preil and Zoltana Gadanyi, who finished fifth at the first World Cup of the season, were overwhelming winners from Greece.

The second heat saw Germany’s Lisa Gutfleisch and Nora Peuser progressing after holding off the United States and Canada.

The immediate target in the men’s double sculls was a top-three place to earn direct passage to the semi-finals.

An impressive Russian crew held off Britain with something to spare in heat two, where the Netherlands claimed third place.

The lightweight women’s double scullers were aiming at a top-two place to secure passage to the final and Switzerland led from start to finish from Germany in the first heat.

In heat two, Marion Colpaert and Tibo Vyvey of Belgium moved past early leaders Isaac Everitt and Christopher Stockley of New Zealand to take the win, with the Kiwis second and Uruguay third.

The third heat was won by Niels Torre and Giuiseppe di Mare of Italy, from Switzerland and Greece.