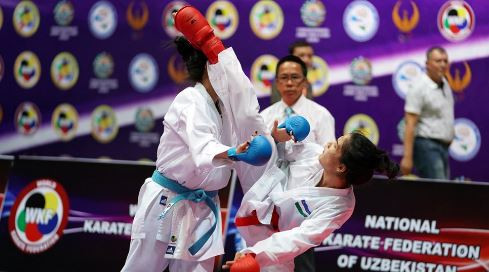 Japan topped the final medal table with six golds at the Asian Karate Federation Senior Championship in the Uzbekistan capital of Tashkent – but home karateka Bakhriniso Babaeva produced arguably the most popular result of the day.

It was one of three titles for the hosts as the annual event concluded in the Sport Complex “Uzbekistan”.

Bronze medals in the female kumite under-50kg class were claimed by Ranran Li of China and Chinese Taipei’s Shiau-Shuang Gu.

Bronzes in the female under-68kg were earned by Kayo Someya of Japan and Jou Chao of Chinese Tapei, with the male under-68kg bronze going to Fahed Ahmad of Jordan and Abdullah Shaaban of Kuwait.

Kiyuna defeated Zigi Zaresta of Indonesia in his final, with bronzes going to Mohammed Almosawai of Kuwait and Hjun Park of South Korea.

Shimizu’s beaten opponent in her final was Hong Kong’s Grace Lau, with Fatemeh Sadeghi of Iran and Phuong Nguyen of Vietnam taking bronze.

Their women beat Iran, with bronze medals going to Vietnam and Kong Kong, while their men beat Malaysia in a contest where bronzes went to Kuwait and Iran.

There were individual male kumite golds, too, for Japan’s Hiroto Shinohara in the under-67kg category as he defeated Didar Amirali of Kazakhstan, with Ahmed Alhadharim of United Arab Emirates and Rahman Almasatfa of Jordan taking bronze medals.

Rising talent Ken Nishimura was the winner in the under-75kg class, beating Abdulaziz Alhakami of Saudi Arabia as bronzes were claimed by Omar Alajenaei of Kuwait and Bahman Asgari of Iran.

Travat Khaksar earned gold for them in the female kumite under-55kg category, beating home karateka Sevinch Rakhimova, with bronze medals going to Istri Agung of Indonesia and I Sok Wong of Macau.

And in the male kumite under-84kg category, Zabiollah Poorshab added a fourth gold to the Iranian collection with victory over Mahmoud Sajan of Jordan, with bronze medals being claimed by Mohammed Almijadi of Kuwait and Japan’s Ryutaro Araga.