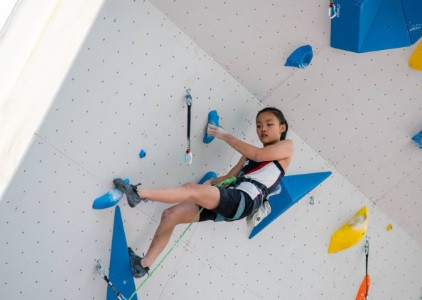 Seo Chae-hyun of South Korea sent a warning to her rivals by winning the semi-final at the International Federation of Sport Climbing Lead World Cup in Briançon.

Overall World Cup leader Seo was the only climber to reach the top of the wall at Parc des Sports in the French commune.

Natsuki Tanii of Japan was second ahead of Slovenian star Janja Garnbret, the reigning bouldering and combined world champion.

Garnbret will be aiming to edge out 15-year-old Seo in tomorrow's final as she continues her bid for a successful World Cup title defence.

Her compatriot Mia Krampl did enough to finish fourth and secure a place in the final as one of the top eight athletes.

Garnbret can't quite stick the top but it's a new highpoint and she's back in the finals! #IFSCwc

In the men's semi-final, Sean Bailey of the United States and Hiroto Shimizu finished joint top to qualify for the final.

William Bosi of Britain was third and Canada's Sean McColl did enough for fourth.

Current overall leader Alexander Megos of Germany failed to reach the final after slipping in qualification.