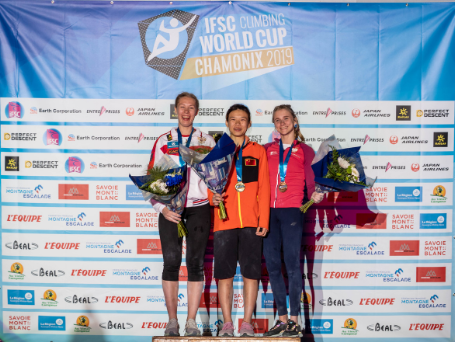 That earned the Chinese the upper hand in the battle for the overall title after former joint-leader Anouck Jaubert of France suffered an early exit to Indonesia’s Aries Susanti Rahayu.

Despite low-friction conditions on the wall, world record holder Song blazed through her races.

She claimed her third gold of the season in fortuitous circumstances after Russia’s Elizaveta Ivanova false started in the big final.

In the small final, Poland’s Aleksandra Kałucka and Susanti Rahayu fell simultaneously at the first attempt.

Kałucka took bronze and her second podium finish of the season after another fall from her opponent.

Bronze went to Russian Vladislav Deulin after a fall for Ukraine’s Danyil Boldyrev.

The overall standings continue to be led by Frenchman Bassa Mawem, with Deulin second.

The final speed climbing competition of the season will take place in Xiamen, China from October 18 to 20.

Adam Ondra of the Czech Republic was the winner of the men's lead final, ahead of Germany's Alexander Megos and Frenchman Romain Desgranges.

YueTong Zhang of China was second, with Austria's Jessica Pilz rounding off the podium.