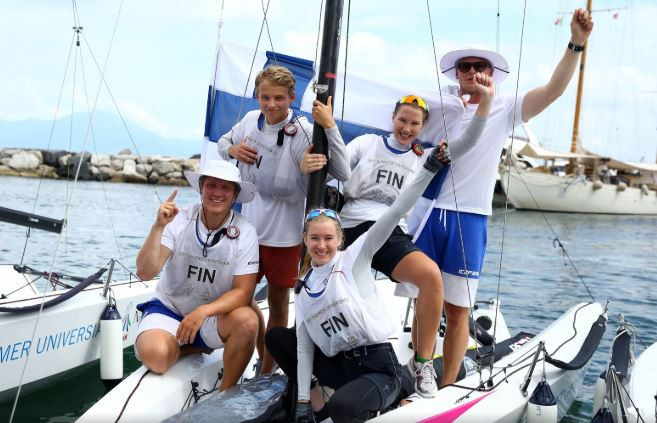 Oskari Muhonen steered Finland to their first gold medal of the Summer Universiade by leading his crew to first place in the mixed fleet sailing competition.

Muhonen, who has made the switch from laser racing to fleet in recent years, is a rising star in the sport and could feature in the medal shake-up at Tokyo 2020.

“We managed to get clean starts and were able to get our own lanes and that was the big difference.

“When you get a clear lane after the start, then it’s easy if you have the speed.

Austria took second under the stewardship of 23-year-old Stefan Scharnagl with a four-round record of 2-4-1-3 for 14 points, double the points score of Finland.

Estonian siblings Lisell and Robin Jaatma stunned favourites Chen Chieh-Lun and Chen Yi-Hsuan of Chinese Taipei to grab their nation’s first gold in Italy as the archery finals began at the Royal Palace of Caserta.

After closing the match level on 155 points apiece, the Estonians hit a perfect 20 in the shootout for victory.

South Korea took bronze with a 149-140 win against Kazakhstan.

“It was not easy for us. In fact, it was really hard.

“Our second match against Turkey was especially difficult but we did our best and we won it.”

Bronze went to Turkey’s Yesim Bostan after she edged out Kazakhstan’s Diana Makarchuk 145-142.

The men’s team compound was won by Suleyman Araz and Muhammed Yetim for Turkey, who needed a shootout to see off Iranians Kiarash Farzan and Mohammadsaleh Palizban after the match ended 156-156.

Mexico won bronze with a 158-150 triumph against the United States.