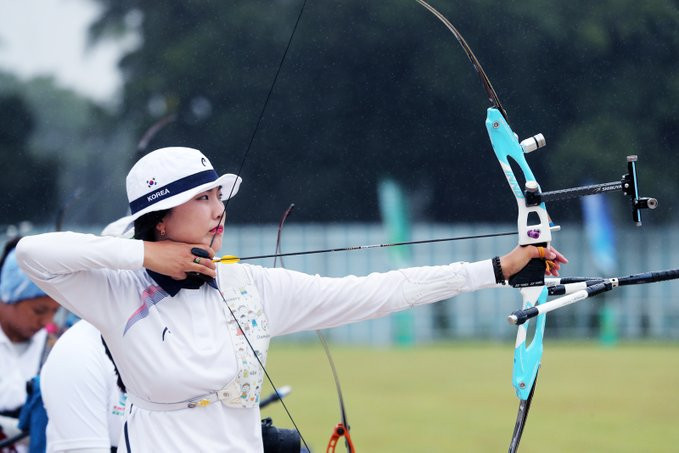 Jeon Ina of South Korea shot the second-highest women's recurve score of the year to top the qualification round at the archery test event for next year's Olympic Games in Tokyo.

The South Korean star took full advantage of favourable conditions as she took first place with 688 out of a possible 720 points at Yumenoshima Archery Field.

The total was four less than the world record score of 692 points amassed by Jeon's team-mate Kang Chae-young at the World Championships in the Netherlands.

South Korea's An San, who arrived in Tokyo having claimed gold at the Archery World Cup in Berlin, was second on 675 points.

Olympic gold medallist Kim Woo-jin continued the South Korean success on the opening day of the event by finishing first in the men's qualification round.

Kim, a member of the South Korean squad which earned the team title at the 2016 Olympic Games in Rio de Janeiro, scored 679 points amid increased rain and wind in the Japanese capital.

World champion Brady Ellison of the United States was second on 677 points, while South Korea's Lee Seung-yun and Sjef van den Berg of the Netherlands each scored 674 to claim third and fourth place, respectively.

"This is a great chance to test the field before the Olympics," said Kim.

"It’s a great help to learn the atmosphere of the stadium and the environmental factors of the field."

The event, the second in the "Ready Steady Tokyo" test event series for the 2020 Games in Tokyo, continues tomorrow.