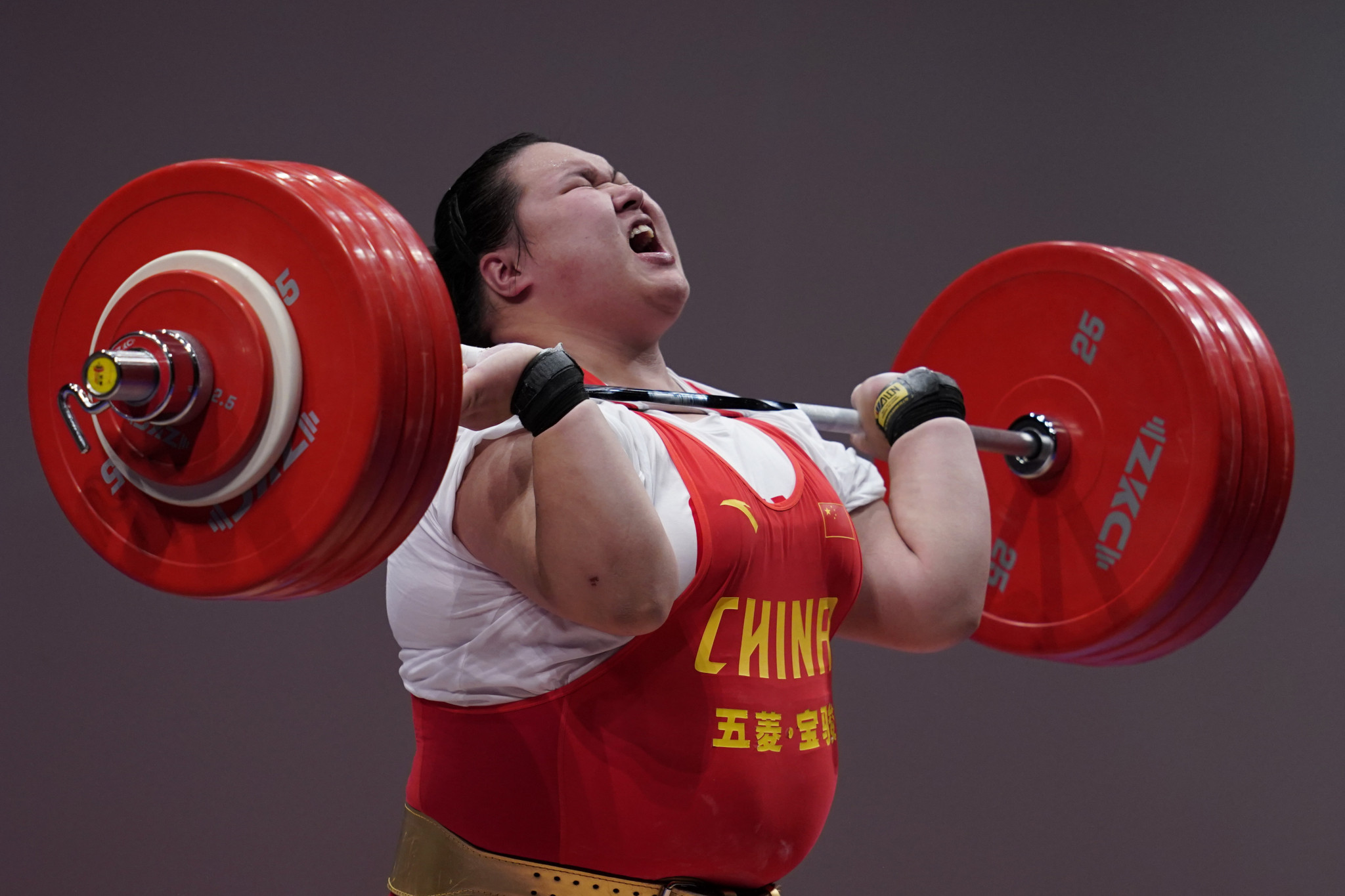 Kashirina failed with her final attempt and Li, who set junior world records in the clean and jerk and total, finished 4kg clear.

In the men’s events there was another outstanding Chinese performance from Tian Tao, the Rio 2016 silver medallist who took one of Sohrab Moradi’s 96kg world records, while Kazakhstan’s multiple champion Ilya Ilyin could finish only eighth of nine when he competed at 109kg for the first time.

Tian missed at 220kg but made a final attempt at 231kg, up 21kg on his previous successful lift, to take the clean and jerk world record from the Iranian world and Olympic champion Moradi.

Nobody in the remaining three weight classes, including the super-heavyweights, could match that effort by Tian, who totalled 406kg.

Li’s sudden surge from obscurity to the top of the Olympic rankings has taken everybody by surprise – except those within Chinese weightlifting who knew of her potential.

Although Li started weightlifting aged 12, after being spotted on a recruitment tour of Liaoning province, she did not lift at a National Championship until last year, when she was 18.

Her original coach Guan Yongmei, who discovered and nurtured Li, did not think she was ready for the rigours of top competition before then.

In her only three appearances in international competition – the International Weightlifting Federation (IWF) World Cup in Fuzhou, the Asian Championships in Ningbo and this test event in Tokyo – Li has finished ahead of Kashirina twice, won a continental title and set a senior snatch world record, as well as a sweep of junior world records.

Li won at Tokyo International Forum because she made five of her six lifts, while Kashirina missed with three attempts, including the final clean and jerk at 187kg, which would have taken her ahead of Li.

At the World Cup in February, Kashirina was returning after a back injury and finished third behind Meng Suping – who withdrew after weighing in in Tokyo – and Li.

That was her first defeat in seven years but Kashirina was back in form in Georgia in April, winning the European title with a world record total of 331kg, and this weekend she expected better.

In Georgia, Gennady Anikanov, Russia’s head coach, said Kashirina’s victory was “a bit boring, like a training session”, and pointed out that “she lifts 185kg in training every other day”.

Unlike Li, Kashirina could not do it on the Tokyo platform, though, and having missed two snatches she finished on 140-182-322.

Anikanov also said in April that at 28, Kashirina would be a potential gold medallist at both Tokyo 2020 and Paris 2024.

That may yet be true, as Kashirina is a a great talent – but her task has become far more difficult with the emergence of Li, and if battle is renewed at the IWF World Championships in Thailand in September it should be one of the highlights of the week.

Russia sent four athletes to Tokyo in the heaviest weight categories, and like Kashirina they were all beaten by Asian rivals.

If that was disappointing, the Russians remain hopeful for the future.

Oleg Pisarevsky, the men’s head coach, told the RIA news agency after last week’s National Championships, “We are experiencing a difficult period, proving to the whole world that we have already ‘healed’ the sins that we had in the anti-doping programme.

“The results and achievements will come – there are a lot of young talents in Russia.

“Maybe this year we will not look so bright, but in the near future, our athletes will become leaders of world weightlifting.”

It does not look so promising for Kazakhstan who, like Russia, can send only two lifters to Tokyo 2020 because of past doping offences.

Ilyin, who forfeited gold medals from Beijing 2008 and London 2012 when he came up positive in retests, lifted his best total (365kg) in Olympic qualifying but is still way short of his best, and a long way down the rankings.

He was behind fellow Kazakhstani Ibragim Bersanov, who finished sixth, and the American Wes Kitts, who was disappointed with his effort of 165-203-368.