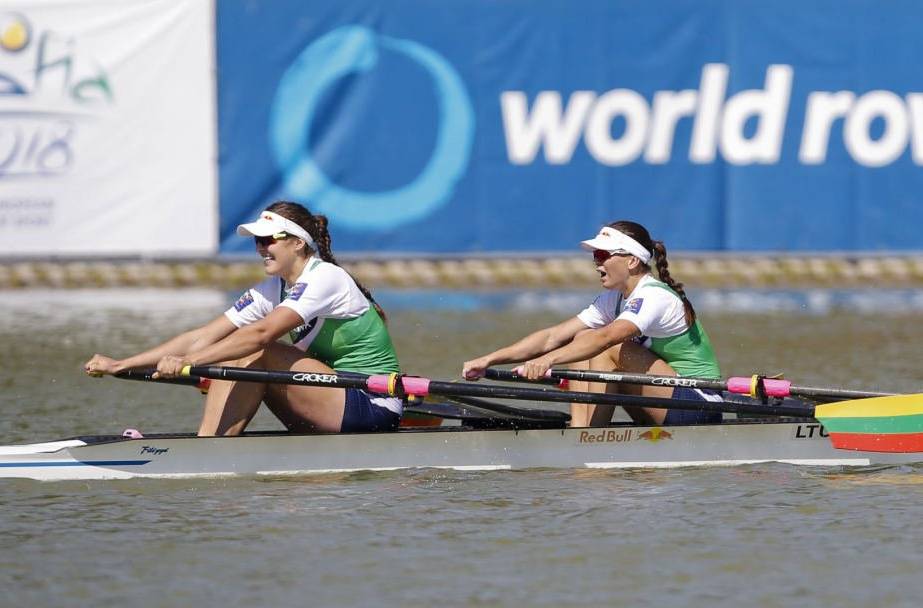 Defending women's world double sculls champions Milda Valčiukaitė and Ieva Adomavičiūtė are out of medal contention on day one of the latest leg of the 2019 World Rowing Cup, held in Poznań in Poland.

The competition, which is the second of three World Cups this season, has more than 800 athletes from 45 countries taking part.

The opening day of competition in Poznań was disrupted by heavy rain in the afternoon, but all scheduled events still took place.

The regatta has added importance as an indicator of form before the World Championships at Ottensheim, Austria in late August, where 2020 Olympic qualification will be on offer.

Valčiukaitė and Adomavičiūtė, victorious in the double sculls at the Plovdiv 2018, World Championships, are in dreadful form, and that continued here as they could only finish third in their heat.

The Lithuanian duo, having finished only fifth in the recent European Championships, went into the repechage but again could do no better than third, ending their medal hopes.

The new European champions, Germany's Leonie Menzel and Carlotta Nwajide, also had to go through the repechage after being overtaken in their heat by China's Shiyu Lu and Yuwei Wang.

However, they took their second chance, winning their repechage heat to reach the semi-finals.

Elsewhere, Tokyo 2020 will see the debut of the women's four as an Olympic event, and Australia served notice of their status as a team to watch with the fastest time in the heats.

They set a time of six minutes 32.50 seconds in heat one, while Denmark also looked strong with their time of 6:33.33 in heat two, beating the lead United States boat which features Olympic champions Emily Regan and Victoria Opitz alongside two members of last year's World Championships-winning crew, Madeleine Wanamaker and Molly Bruggeman.

We're well underway here in Poznan at the 2019 World Rowing Cup II 😍 make sure to tune in and see all the action!#worldrowing #WRCPoznan #rowing pic.twitter.com/2tAWR2sDkv

Another newly-formed team catching a lot of attention are the New Zealand men's eight, but they will have to go through the repechage to reach the final after being narrowly pipped by Germany in their heat today.

New Zealand have put together a team including 40-year-old double Olympic champion in the single sculls, Mahe Drysdale, and double Olympic men's pair gold medallist Hamish Bond who is returning to the sport after a two-year cycling career that saw him earn a Commonwealth Games bronze medal in the road time trial.

However, they could only finish second in heat one, nearly two seconds behind Germany, who won with a time of 5:33.44.

In the women's eight, Australia and Olympic champions United States won their heats to qualify automatically for the final on Sunday.

Germany's rising young talent Oliver Zeidler, who won the European single sculls title, produced a strong showing to win his heat, leading throughout for a time of 7:03.98.

He finished nearly five seconds ahead of Robbie Manson, the New Zealander who displaced Drysdale from his signature event after winning the national trials.

Hosts Poland and Britain won the heats in the men's quadruple sculls, leaving Olympic champions Germany to deal with the repechage tomorrow.

Competition continues over the next two days, ending on Sunday (June 23).