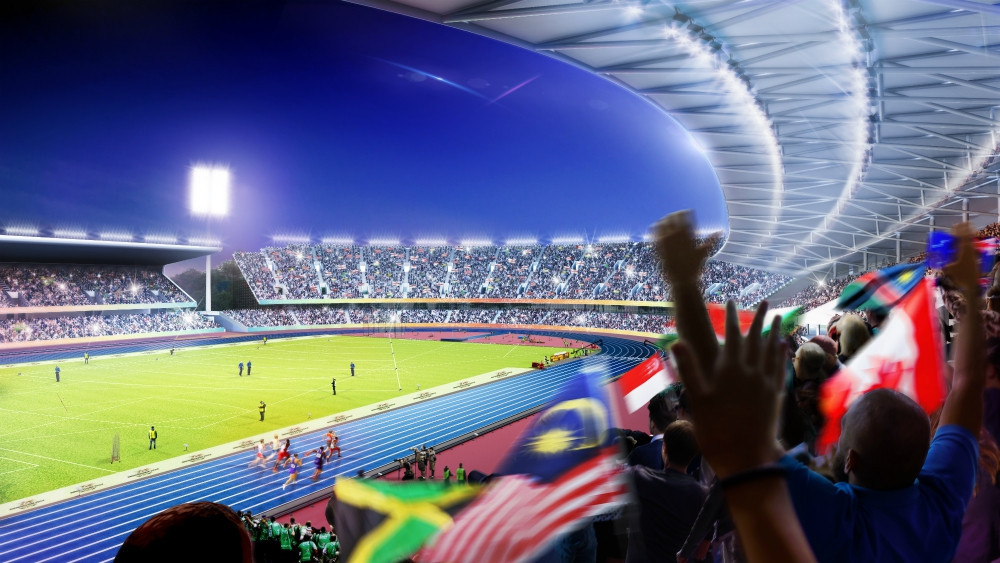 Making Alexander Stadium the permanent home of British Athletics after Birmingham has hosted the 2022 Commonwealth Games has been set as the goal as £70 million ($78 million/€88 million) redevelopment plans were unveiled here today.

The venue in Perry Barr is set to be the focal point of the Games, hosting the Opening and Closing Ceremonies, as well as the athletics programme.

New artist impressions of the stadium have been released revealing Birmingham City Council’s intentions to create a legacy asset for the area.

This includes hosting the major athletics events staged in Britain, including the International Association of Athletics Federations (IAAF) Diamond League meeting currently held at the London Stadium built for the 2012 Olympic Games.

Premier League club West Ham United are the current anchor tenant of the London Stadium but will not pursue an option to buy it outright until it is a dedicated football arena.

Under the current 99-year deal, a certain number of days each year have to be given over to athletics but there is a growing belief that the amount it costs each year to convert the Stadium, using retractable seating so it can host track and field, is too expensive and the overall upkeep of it is too much of a burden on the taxpayer.

The current configuration of the Stadium is also unpopular with West Ham supporters.

Birmingham City Council Leader Ian Ward believes a revamped Alexander Stadium would offer athletics in Britain the opportunity of having a purpose-built answer.

"I would hope that we would get those events," Ward told insidethegames when asked if he thought Birmingham should stage the country's leading athletics meetings following the redevelopment.

"We know there are issues with the London Stadium in terms of moving seats in and out.

"The investment we are making here provides a solution.

"I also know the [West Ham] fans are not entirely happy with the Stadium."

Under the plans revealed today, Alexander Stadium will increase its permanent seating capacity from 12,700 to 18,000, allowing up to 40,000 during the Commonwealth Games through additional temporary seating.

There will also be installation of new Stadium lighting and a practice throwing field.

It is planned to improve parking, with additional landscaping and signage, and a new access road from A453 Aldridge Road to be used during events.

"We’re now in an exciting phase of the design process where we would like to share our plans for the future with the community and hear their thoughts," Ward said.

"The team has designed a redeveloped Stadium which will meet the needs and aspirations of the community for generations to come.

"This is about creating a destination venue, shaping a legacy beyond the Commonwealth Games.

"We are making lots of information and detail available, so I encourage as many people as possible to come along, have a look at the designs and provide their feedback."

Birmingham City Council and its partners will be funding the Alexander Stadium redevelopment out of its 25 per cent contribution to the budget – about £180 million ($230 million/€200 million).

The new design, which is to be project managed by construction company Mace, will facilitate the temporary "Games overlay" elements and additional infrastructure needed to deliver the 2022 Games.

Demolition of the current west stand within the Stadium is subject to a separate application which will be submitted to Birmingham City Council later this summer.

Subject to gaining planning permission, the redeveloped stadium will be ready ahead of the Games due to take place between July 27 and August 7, 2022.