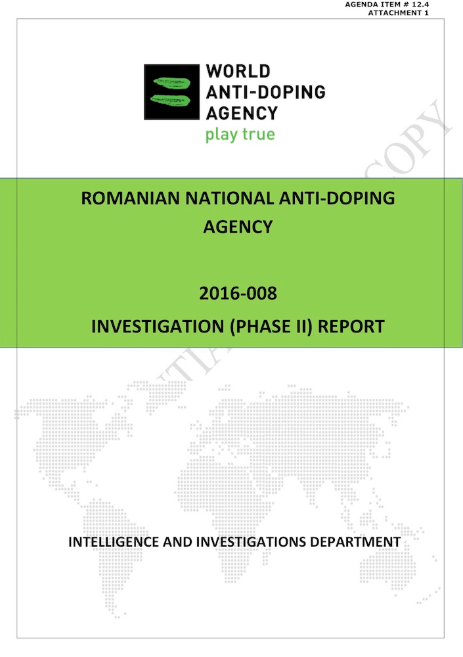 It comes after a second investigatory report found that the body had directed the Bucharest Laboratory to cover up positive doping tests relating to at least three athletes.

The report, which was provided to The Sports Integrity Initiative by a whistleblower, found that directions were given by Graziela Elena Vâjială, the ANAD President from its foundation in 2005 until January 2019, when she was replaced by Pavel-Cristian Balaj after retiring from office.

It also discovered that ANAD director general Valentina Alexandrescu "was, at best, wilfully blind to the misconduct of President Vâjială or, at worst, actively complicit".

WADA's report, which is marked as confidential and was presented at its Foundation Board meeting in Montreal in May, recommends that both are dismissed from their posts although Vâjială has now already gone.

Two senior directors involved in the cover-up of positive samples at the Bucharest Laboratory have already been sacked after new leadership was established in November of last year.

WADA revealed in May 2018 that the samples had been covered-up by director Valentin Pop and his deputy Mirela Zorio under the direction of a third party, now identified as ANAD.

Günter Younger, director of WADA's intelligence and investigations department, announced at a Foundation Board meeting in Montreal that an "external entity" had pressured the directors into covering up the samples at the Laboratory in the Romanian capital.

The accreditation of the Laboratory was initially suspended for six months in February but was then extended pending the outcome of the investigation.

In April, WADA announced that it had reinstated the accreditation and that the Laboratory was, therefore, able to resume all of its anti-doping activities, including the analysis of urine and blood samples, with immediate effect.

The decision to reinstate the accreditation was based on a recommendation made by WADA's Laboratory Expert Group, which was satisfied that it had successfully addressed its non-conformities with the International Standard for Laboratories.

The Sports Integrity Initiative reports that, despite WADA pressure leading to August 1 in 2016 legislative changes in Romania, the second report found that ANAD continued to influence the Laboratory until December 2017.

It found this was partly due to Vâjială rejecting suggested changes to staff recruiting policy, following a Government moratorium on hiring new staff.

The Sports Integrity Initiative also states it appears that Alexandrescu was still employed by ANAD on May 14, after Balaj took over from Vâjială as ANAD President.

The report found that Vâjială directed the Bucharest Laboratory to hide a positive test for human growth hormone as an internal quality assurance scheme blood sample, which was said to be an idea of Zorio.

"This allegation was investigated as part of the phase one investigation," the phase two report reads.

"However, fear of reprisals from the well-connected President Vâjială prevented witnesses from coming forward.

"Consequently, the allegation could not be substantiated.

"On November 29, 2017, following the suspension of the Bucharest Laboratory and the removal of then director Pop, two Laboratory staff felt sufficiently safe to come forward."

Stan said that following a WADA raid on the Laboratory in November 2016, Vâjială convened a meeting at which she ordered Laboratory staff to protect the athlete concerned – weightlifter Gabriel Sîncrăian.

The report states that Sîncrăian, stripped of his Olympic men's 85 kilograms bronze medal from Rio 2016 after the International Weightlifting Federation reported he had tested positive for excess testosterone in a test connected to the Games, will be interviewed as part of this investigation.

The second WADA report found that Vâjială ordered the Bucharest Laboratory to inform her of every sample showing a presumptive adverse analytical findings (AAF) after the initial testing procedure.

In 2016, as a result of this, she was informed of AAFs involving furosemide for Romanian wrestlers Elena Scarlatescu and Suzana Seicariu.

WADA’s second report found that even if furosemide was detected, Vâjială had ordered Pop to report the samples as negative.

It also discovered that she ordered Pop to compose a letter backdated to April 28, 2016, directing that analysis of samples would only be communicated to ANAD through ADAMS.