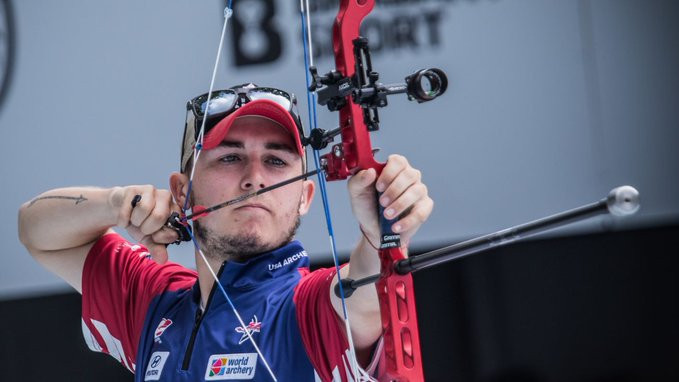 James Lutz of the United States and Russia's Natalia Avdeeva struck individual compound gold on the opening day of medal matches at the World Archery Championships in the Netherlands.

Lutz became the first American to hold the world men's compound title as he beat Anders Faugstad of Norway in the final in 's-Hertogenbosch.

The 21-year-old prevailed with a 148-144 triumph to cap his remarkable rise to the top of the compound discipline.

Lutz only emerged on the international scene earlier this year and competed at his first major event when he took part in the World Cup in Antalya in Turkey, where he claimed gold with a perfect 150-point final.

"I am trying to let it sink in," he said after he was crowned world champion.

"I just don’t think nerves really hit me like they do some people.

"I dropped a couple of points that I really didn’t want to.

"But I’m confident with my bow."

Avdeeva added the outdoor title to the world indoor crown she claimed last year as she topped the podium in the women's compound event.

The Russian denied the US a further gold medal by defeating Paige Pearce by a slender 142-141 margin.

Bronze in the women's competition was claimed by India's Jyothi Surekha Vennam after she overcame Turkey's Yesim Bostan in a tiebreak.

Kim was able to celebrate a gold medal today as he was a member of the South Korean squad which sealed the team title.

The South Korean side, which also included Choi Yong-hee and Yang Jae-won, beat Turkey 235-233 in the final.

The Netherlands ousted Colombia 231-230 to finish with the bronze medal.

In the women's team compound tournament, Chinese Taipei defeated the US 229-224 to take gold, while India edged out Turkey 229-226.