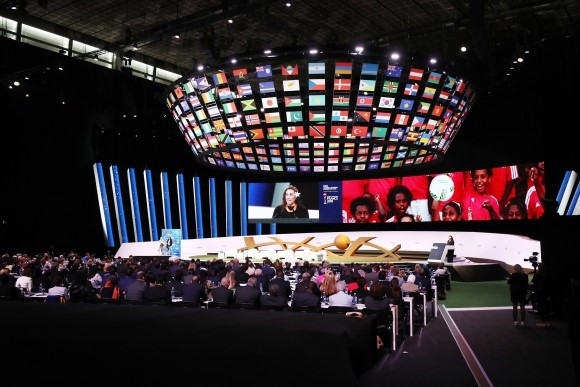 The inaugural FIFA Women's Football Convention began today in Paris as delegates from confederations and 211 member associations gathered to debate the key priorities for the development of the female game.

Using the five strategic pillars of the FIFA Women’s Football Strategy launched in October, the opening day of the event – held on the eve of the first match of the 2019 FIFA Women’s World Cup in France – included a programme covering topics that ranged from the importance of youth competitions, the commercialisation of the game to the empowerment of women through football.

The opening day included contributions from leading figures from the world of football and sports such the BBC’s director of sport Barbara Slater, Olympique Lyonnais President Jean-Michel Aulas and "FIFA Legends" Karina LeBlanc and Clarence Seedorf.

"Today some of the world’s leading practitioners and representatives from women’s football have assembled together in Paris to share the challenges we experience, as well as examples of best practice in football and beyond," Sarai Bareman, FIFA's chief women’s football officer, said.

"By bringing in leaders from the worlds of business, the media and international organisations, we were able to map out some important step to build a brighter future, not only for women’s football but also in society."

FIFA described the sessions as engaging with attendees and women’s football stakeholders participating online through the official hashtag #FIFAWFC2019.

"The day saw intriguing and open discussion about key areas of the women’s game from some of the most influential figures in the industry featuring the significance of visibility and role models to inspire the next generation highlighted, right through to the importance of investment into the women’s game and developing the next generation of female leaders and administrators and leaders," a FIFA statement reads.

"There was an overwhelming consensus that the women’s game is in the best position it has ever been in, while the view was that this summer’s FIFA Women’s World Cup could act as a springboard for confederations and associations to move the game forward and make football accessible to all."

The day concluded with a panel that focused on education and empowerment, with some inspiring and emotional stories told about the barriers overcome to deliver football to women and girls in countries including Uganda and Mauritania.

"Throughout today, many participants and attendees and FIFA Women’s Football Convention have been overwhelmed by the energy and enthusiasm shown by everyone in the room," Bareman added.

"There is a genuine appetite among so many to elevate the women’s game to new levels and the FIFA Women’s Football Convention has provided an important platform to inspire and empower women and girls around the world.”

Topics that will be discussed include the challenges, barriers and opportunities for growth and development of the women’s game, as well as how sustainable strategies, programmes and partnerships can contribute to both women’s football and a more diverse and inclusive society.

Parc des Princes in Paris will host the opening match of the World Cup tomorrow, with the hosts taking on South Korea in Group A.

The competition will then continue across nine French cities until the final on July 7.

The opening clash sold out within 48 hours.