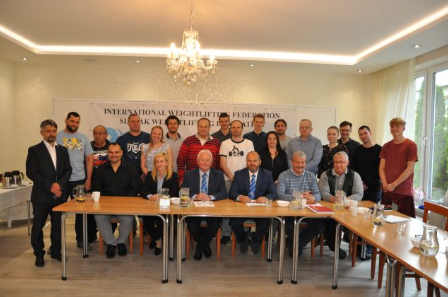 A seminar which covered anti-doping and rule changes was staged by the Slovak Weightlifting Federation (SWF).

More than 30 participants – including athletes, coaches and referees – attended the two-day event and listened to speeches on subjects including the qualification system for the Tokyo 2020 Olympic Games.

Knowledge was also shared on how to develop weightlifting in the Eastern European nation.

The seminar was opened by Jan Stefanik, the President of the SWF, and an anti-doping talk was led by International Weightlifting Federation (IWF) legal counsel Lilla Sági.

The lecture covered recent changes in the IWF’s anti-doping programme, paying particular attention to the partnership between the IWF and the International Testing Agency.

Further information was given to the participants about the most important rules and the 'whereabouts' system – Anti-Doping Administration and Management System, better known as ADAMS – which has caused controversy.

More than 40 lifters were barred from the European Weightlifting Championships last month as they had failed to log sufficient whereabouts information, while further bans were issued at the subsequent Pan American Championships.

Also on the first day in Slovakia, a lecture was given by IWF director general Attila Adamfi on the qualification system for Tokyo 2020.

On day two, he gave a presentation on new rules and discussed the implementation of video playback technology.

At the final session, an interactive discussion was held on rule changes led by officials from the SWF.