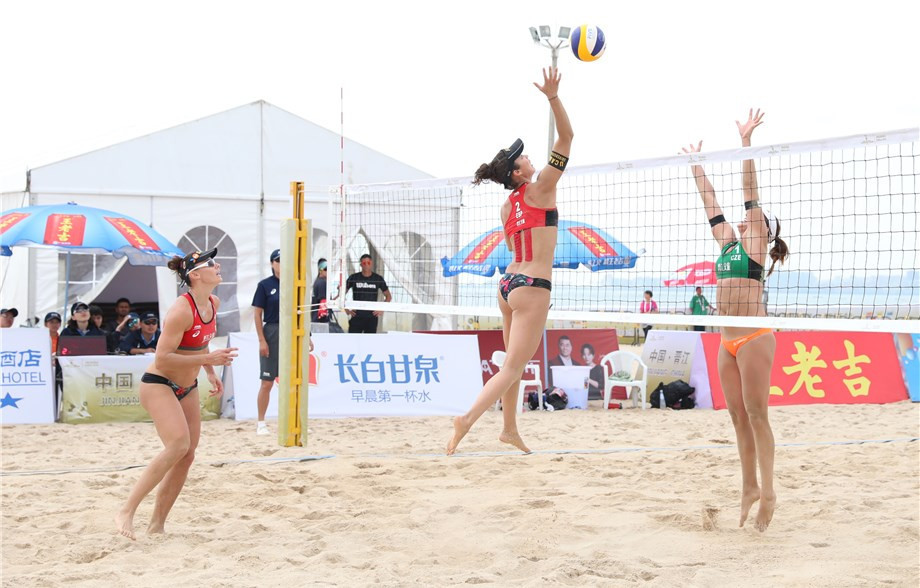 Their 21-18, 21-19 success over the Czech duo in China helped them top Pool A and advance directly to round two of the knockout phase tomorrow, the last 16 of the competition.

Hermannova and Slukova, who also lost to the Spaniards at the Rio 2016 Olympics, still finished second in the group at the four-star event but this meant they had to play an extra match today in round one of the knockout phase.

They duly won this 21-11, 21-18 against Ukraine's Diana Lunina and Maryna Samoday to reach round two as well, albeit by taking the long way round.

"We knew it was going to be tough because they are number one in the tournament and they are playing great last season and this season," said McMillan after their win.

"I think we did a good job, we were pretty constant and that maybe made the difference, so we're very happy."

Steiner added: "It was tough, they were serving on me and I struggled a little bit in some points of the game but I think we went through it, we fought for the game and we really got it."

Elsewhere, Brazil enjoyed a strong day in the women's events as three duos topped their pools to progress directly into tomorrow's play.

Agatha Bednarczuk and Eduarda Santos Lisboa, Maria Antonelli and Carolina Solberg Salgado and Ana Patricia Silva Ramos and Rebecca Cavalcanti Barbosa Silva will all hope to benefit from the extra rest when the competition resumes.

In men's competition there was disappointment for the hosts as China's top-ranked pair Gao Peng and Li Yang were knocked out in the first knockout stage after a second-place finish in their pool.

They lost to Italy's Enrico Rossi and Adrian Ignacio Carambula Raurich who came from behind to win 18-21, 21-18, 15-13 after coming third in their pool.

"We're feeling pretty emotional I would say, it was a hard game for us because defensively we couldn't find how to stop them," said Carambula.

Defending champion Trevor Crabb and new partner Tri Bourne also needed an extra knockout match after finishing second in their pool, but they negotiated it by beating Australia's Cole Durant and Damien Schumann 21-16, 21-19.

Two more American pairs also reached the last 16 on a good day for the country – Nicholas Lucena and Philip Dalhausser and John Hyden and Ryan Doherty.

Tomorrow will see the men's finalists confirmed with their last 16, quarter-finals and semi-finals all scheduled.

The women will play up until the last eight with their semi-finals, and both finals, on Sunday (March 26).