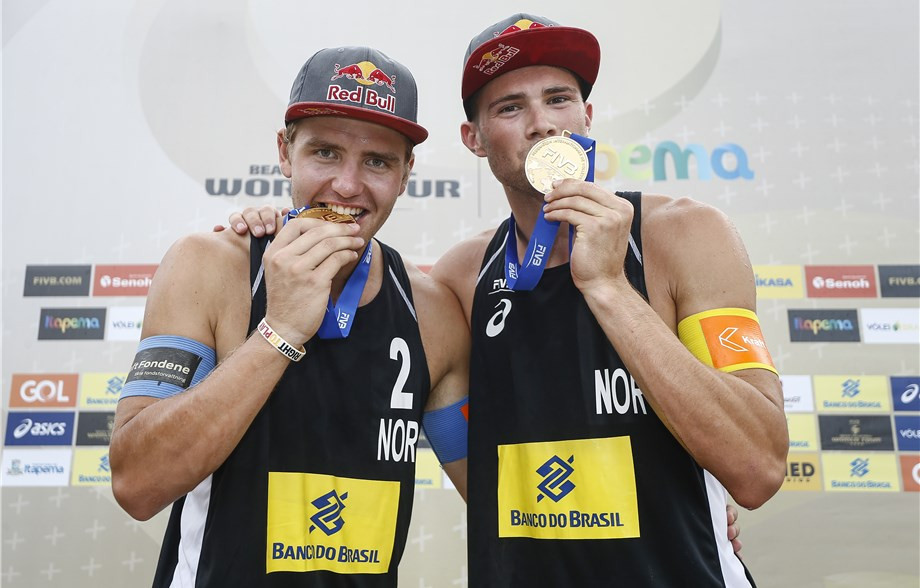 Norway’s Anders Mol and Christian Sørum were the winners of the men's event in Itapema as beach volleyball teams from Europe swept all medals from an International Volleyball Federation (FIVB) World Tour stop on Brazilian soil for just the second time.

The triumph was a sweet one for the duo, who won their first international medal together one year ago in Itapema, when they claimed silver.

That result was just the preamble to their amazing run in the summer, during which they captured gold medals in the Gstaad and Vienna Majors, the World Tour Finals and the European Championships.

"This is a very special place for us," Sørum said.

"When we first got here last year there were so many people cheering for us that we felt as if we were playing in our home court.

"There were even more people in the stands this year and for us to return here and take gold was fantastic."

The men’s bronze medal match did not happen as Polish defender Bartosz Łosiak sustained an ankle injury in yesterday's semi-finals and was not able to join his partner Piotr Kantor on the court.

With that, the Netherlands’ Christiaan Varenhorst and Steven van de Velde claimed bronze – their first medal as a team.

The Dutch pair had played in just two World Tour events prior to Itapema, finishing ninth in Qatar's capital Doha and 33rd in Chinese city Xiamen, and will benefit hugely from the 640 ranking points they have earned.

On the women's side, fifth seeds April Ross and Alix Klineman captured their third World Tour gold medal together with a hard-fought 25-23, 18-21, 15-10 victory over Canada’s Sarah Pavan and Melissa Humana-Paredes.

The final was a rematch of the Huntington Beach Open gold medal match earlier this month.

As in Brazil, Ross and Klineman also needed three sets to prevail over the Canadians, who are their training partners, in California.

"It’s going to be a battle every time and we just feel great that we came out on top one more time."

World ranking leaders Brandie Wilkerson and Heather Bansley of Canada clinched a second consecutive bronze medal in Itapema after a 21-19, 17-21, 22-20 win over the Netherlands’ Marleen van Iersel and Joy Stubbe.

It was the seventh medal won by the Canadians in just one year and the third in the 2018-2019 season.

They won golds in Warsaw, Las Vegas and Mexican city Chetumal, silver in Ostrava in Czech Republic and bronzes in Itapema and Swiss town Gstaad.

The FIVB Beach Volleyball World Tour is set to continue next week with a four-star event in Jinjiang in China, and a one-star tournament on the island of Boracay in the Philippines.