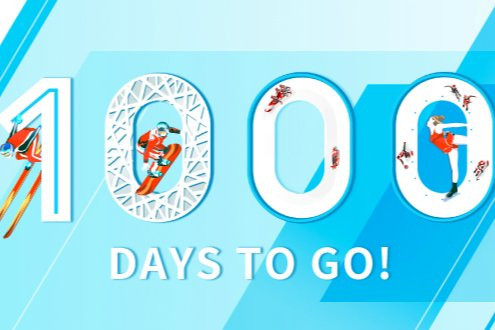 Organisers of the Beijing 2022 Winter Olympic Games held a flash mob on skis as part of the celebrations marking 1,000 days to go until the event.

They were joined by actors Tong Liya, Chen Xiaoduo and Yun Fei in singing the songs "Beijing Welcomes You" and "Me and My Motherland".

China launched its 1,000-day countdown to the 2022 Winter Olympics earlier this month with a lavish celebration in Beijing, which is due to become the only city in the world to host both a Summer and Winter Games.

Actor Jackie Chan took part in the activities along with officials from the International Olympic Committee, including vice-president Juan Antonio Samaranch junior.

Beijing aims to boost the number of Chinese taking part in winter sports to 300 million, or 22 per cent of the population, by the start of the 2022 Olympics.

Ski resorts have multiplied in the country since Beijing won its bid for the Games in 2015.

The Winter Olympics will be held across three zones – Beijing, Yanqing and Zhangjiakou.