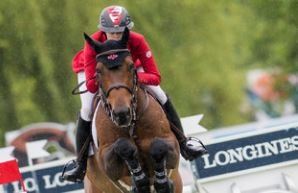 A potential place at the Tokyo 2020 Games will loom beyond the barriers as the third in this year’s 12 qualifying events for the Longines International Equestrian Federation (FEI) Jumping Nations Cup Final gets under way tomorrow (May 2) at Coapexpan in Mexico.

This year the series has an additional importance as the last qualification spot for next year’s Olympic Games will be taken by the highest-placed finalist not to have already booked a place – with that final being scheduled from October 3 to 6 at Real Club de Polo in Barcelona.

The Mexican event is the second of three qualifiers for the North/Central America and Caribbean region, following the series opener at Wellington, Florida from February 13 to 17.

It will involve three teams – Canada, United States, who are the world champions, and the hosts, who earned an outstanding win in the opening regional competition in Wellington, where their opponents were a home team and one from Israel.

Only one of that Mexican team is selected for the home event – 24-year-old anchorman Manuel Dufrane, who provided one of two double-clear performances along with 23-year-old Eugenio Garza Perez.

On this occasion Dufrane will be accompanied by Federico Fernández, Lorenza O'Farrill, Salvador Oñate and Patricio Pasque.

For this event, the United States has picked a new set of riders in Alex Granoto, Eve Jobs, Nicole Simpson Shahinian and Ricard Spooner.

Each team in the series has been allocated four specific qualifying opportunities, with all four results counting in the battle for a qualifying spot at the 2019 Final.

Belgium won the 2018 title, just ahead of France and Ireland.