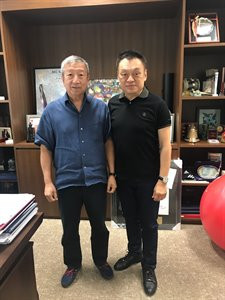 Breakdancing making its debut on the Olympic programme at the Games in the French capital was among the main topics of the meeting.

It was one of four sports, alongside skateboarding, surfing and sport climbing, recommended for provisional inclusion by the IOC Executive Board last month.

Tay and Ser Miang discussed governance of breakdancing amid uncertainty over the true governing body for the sport.

They also spoke about the development of other dance sport disciplines.

In a statement, the WDSF claimed Tay "valued the input from the long-time Olympic and sports administrator and added that he looked forward to continued dialogue with Mr Ng in the months ahead".

"President Tay said he was delighted to meet with Mr Ng and the two had very positive and productive discussions," the statement added.

Breakdancing, skateboarding, surfing and sport climbing are likely to be included at Paris 2024 and the IOC Session is expected to provisionally rubber-stamp their places on the programme in June.

Major competitions in breakdancing are set to be analysed by the IOC before it is confirmed by the Executive Board in December 2020.

The IOC will look at elements such as management of the sport, governance, integrity of competitions and refereeing and judging systems.