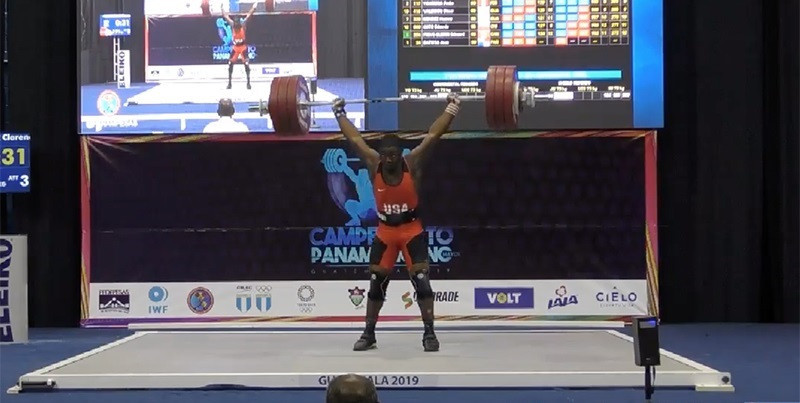 The United States' CJ Cummings was in record-breaking form as he claimed the men’s 73 kilograms title on day two of the Pan American Weightlifting Championships in Guatemala City.

The 18-year-old, a junior world champion for three years running, went six for six to snatch 153kg and clean and jerk 191kg on his third lifts at Coliseo Deportivo.

In many cases, Cummings was breaking his own records, including his junior world records set at last year’s Senior World Championships in Turkmenistan’s capital Ashgabat.

"Are you serious?" Cummings gasped when told he had set 15 records.

The result will go a long way towards Cummings qualifying for the Tokyo 2020 Olympic Games.

The Pan American Championships are considered a gold event for Olympic qualification, meaning his total is weighted at 1.1 for the International Weightlifting Federation Absolute Ranking, which will largely determine the Olympic team come April 2020.

Colombia’s Luis Mosquera was the overall silver medallist with 322kg, while compatriot José Gavino took the bronze with 319kg.

In the men’s 67kg category, Mexico’s Jonathan Muñoz prevailed with a total of 304kg.

There was another victory for the US in the women’s 55kg division as Jourdan Delacruz matched the Pan American record total of 207kg.

In the women’s 59kg category, Rosive Silgado led a Colombian one-two with a total of 220kg.

Fellow countrywoman Maria Lobon ranked second with 215kg, while the US’s Jessica Lucero rounded off the podium with 207kg.