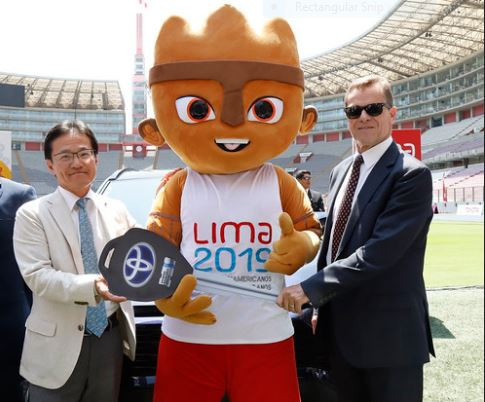 Toyota has been announced as the new gold sponsor in the automobile category for this year's Pan American and Parapan American Games in Lima in a deal reported to be worth $2.5 million (£1.9million/€2.2milliion).

Lima 2019 also revealed Toyota as the sponsor of the Lima 2019 Torch Relay, due to travel through Peru for a period of 23 days before the Games - scheduled to take from July 26 to August 11 - get underway.

The leading Japanese car manufacturer signed a contract at the Peru National Stadium that will see the provision of 15 hybrid vehicles.

These include the Prius, Rav4 and the new Hatchback which will soon be launched in the Peruvian market.

Toyota will provide drivers, fuel, insurance and parking for its vehicles for the transfer of the world-class athletes and VIPs attending the Games, as well as for the Lima 2019 Torch Relay which will visit 19 cities in Peru.

In addition to vehicle contributions, Toyota’s involvement in Lima 2019 will include promotion of the Games through publicity campaigns, as well as on its digital and social media platforms.

"Toyota has a long track record of proven success and we are proud to be partnering with them to deliver an exceptional Games," said Lima 2019 President Carlos Neuhaus.

"This gold sponsorship supports our mission to deliver an inspirational Pan American and Parapan American Games that fosters inclusion, opportunity and accessibility for all people across the Americas.

"Our goal is to put sport at the heart of Peruvian life and establish Lima as the sports capital of the Americas.

"It inspires us, pushes us to outdo ourselves and achieve the impossible.

"But more than anything, it unites us in an embrace of celebration in which respect for others predominates.

"Toyota is proud to be an ally of Peru in the organisation of the Pan American and Parapan American Games.

"The eyes of the Americas and the world will be on Lima and together - organisers, authorities, private companies and the public - we must ensure that this sporting festival will be an example for future generations."

Lima 2019 attendees will also be able to visit the Toyota House which will be located at the brand new Videna Sports Complex throughout the Games.

The House will host a wide range of interactive activities for fans, during which Toyota will exhibit some of its latest technologies.