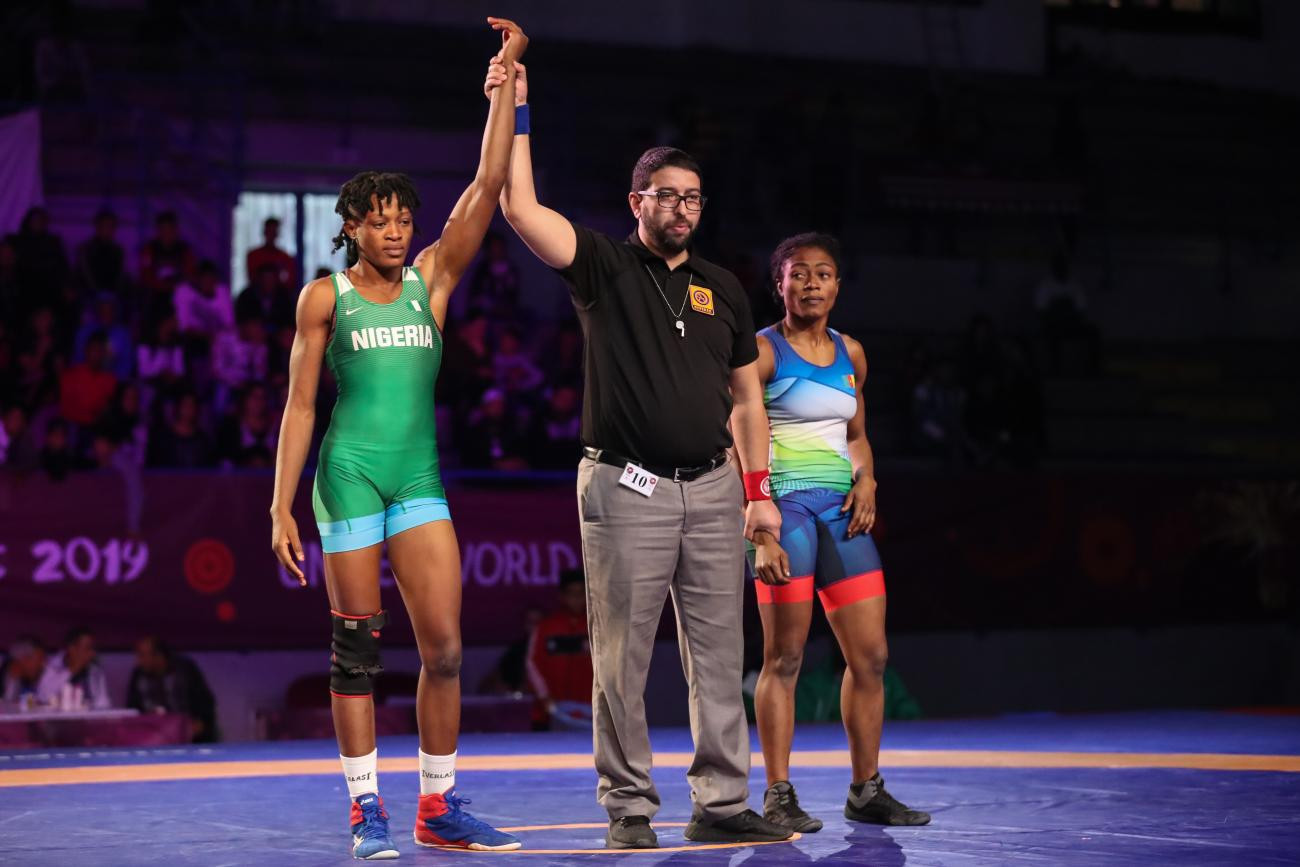 Nigeria claimed the women’s team title at the African Wrestling Championships for the third consecutive year after winning five gold medals today in Hammamet in Tunisia.

The Nigerians finished with 195 points having secured medals in nine of the 10 weight categories at Salle Omnisports de Hammamet.

Their gold medallists were Miesinnei Genesis at 50 kilograms, Odunayo Adekuoroye at 57kg, Sunmisola Balogun at 65kg, Blessing Oborududu at 68kg and Blessing Onyebuchi at 76kg.

Adekuoroye, the 2017 world silver medallist, was the only Nigerian wrestler to win a non-Nordic style bracket.

In the 57kg final, she used a cross-ankle pick to score a 29-second fall over Cameroon’s Joseph Essombe Tiako.

It ensured her a fourth straight continental title.

The other four Nigerian gold medallists won their titles by going undefeated in the round-robin competitions.

Senegal’s Anta Sambou was the runner-up to Oborududu with Tunisia’s Lilia Mejri third.

In what was expected to be the women’s wrestling bout of the night, the 62kg final saw Rio 2016 Olympic bronze medallist Marwa Amri dump Aminat Adeniyi of Nigeria on her back and score the early first-period fall.

Algeria’s Lamia Chemlal was the silver medallist ahead of Egypt’s Faten Ahmed.

Their three champions were Hala Ahmed, Eman Ebrahim, and Samar Hamza, who triumphed at 53kg, 59kg, and 72kg, respectively.

The six Egyptian champions were Moamen Mohamed at 60kg, Haithem Mahmoud at 63kg, Mohamed Elsayed at 67kg, Ahmed Ahmed at 82kg, Mohamed Metwally at 87kg and Abdellatif Mohamed at 130kg.

Of those, Mahmoud and Metwally were the only two who competed in traditional brackets.

He built a five-point lead off a passivity point and a pair of gut wrenches before stopping a headlock to pick up the fall.

Algeria had a trio of champions – Abdelkarim Fergat at 55kg, Tarek Benaissa at 72kg and Adem Boudjemline at 97kg.

The 10th and final Greco-Roman gold medal of the day went to Morocco's Zied Ait Ouagram, who won the 77kg title to improve on his runner-up finish from last year and claim his 10th African title.

Action in Hammamet is due to conclude tomorrow.