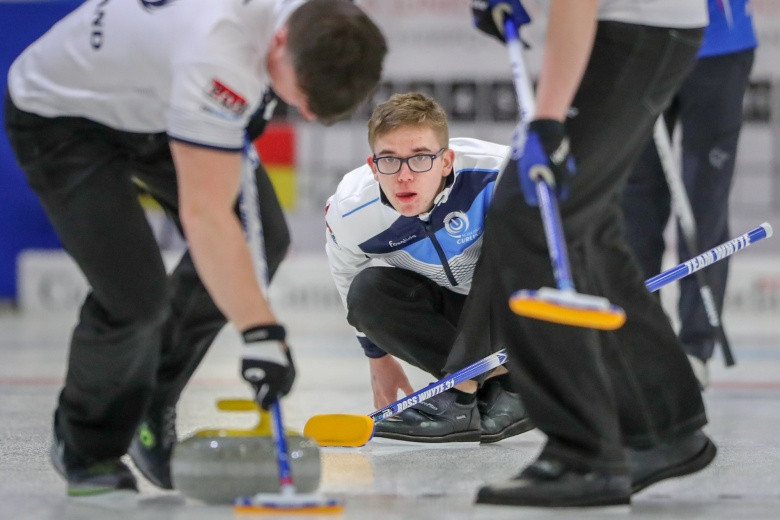 Last year’s runners up Scotland have become the first men’s team to gain a place in the play-offs at the World Junior Championships in Liverpool with an 8-6 victory over Switzerland.

Their victory today at the Queen’s Place Emera Centre in Liverpool was their seventh in a row and secures the team, skippered by Ross Whyte, a place in the next round.

In the round robin table in the tournament in Nova Scotia three teams share second place behind them; hosts and defending champions Canada, who beat Germany 8-6; Norway, who saw off Italy 10-6; and the United States, who defeated New Zealand 8-3.

The Scots did not have it all their own way today, going into the eighth end 5-3 behind.

The game was turned around when Whyte produced a score of five points with the last stone in the eighth end.

After Canada’s win their skipper Tyler Tardi called the win an "emotional roller-coaster".

"We know we’re going to be tested this week, so it’s good to get that one out of the way," Tardi said.

"We always know it’s going to be a great battle - all the teams here are great and deserve to be here."

In the women’s event, there is tie for the top spot between Switzerland and China.

The Swiss entered their match against Canada unbeaten but could not maintain that streak, falling to a 4-6 defeat.

China, meanwhile, beat the US 9-8, meaning both them and Switzerland now have five wins from six games.

Neither side has qualified for the playoffs yet.

Tomorrow both men’s and women’s round robin action are due to continue.